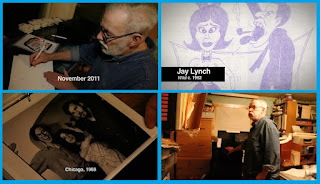 Screengrabs from a video called BB&B SPECIAL FEATURE: THE ARCHIVE OF JAY LYNCH ( found on YOUTUBE ).

One of my favorite artists recently past away. His name was Jay Lynch and I loved - and still love - his artwork. 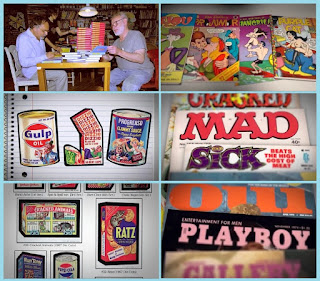 Screengrabs from a video called JAY LYNCH: KEEPING UP WITH THE KIDS ( found on YOUTUBE )

He did a variety of work, and some of it was for underground comics. He also did a lot of work for TOPPS.

Remember WACKY PACKAGES?.... Well, I do.

His art has been in my life since childhood.

If you've been to this website before, then you know I hate ninety-nine percent of all superheros. I've always preferred underground comics. The subject matter of those comics, usually involved sex, crime, drugs, horror, and more.

I discovered those publications during the sixties and seventies - via the social misfits in my neighborhood.

Above, are examples of the art found in HOUSE OF MYSTERY VOLUME ONE... Story THE BEAUTIFUL BEAST ( written by Joe Gill with artwork by Al Williamson - page 305 ).

Last year, I saw three massive softcover collections for the bargain price of $5.95 each. I didn't think twice about ordering them ( from HAMILTON BOOK.COM ).

Each of these volumes are THICK! You could probably knock someone unconscious if you hit them with one... but, please DON'T do that! 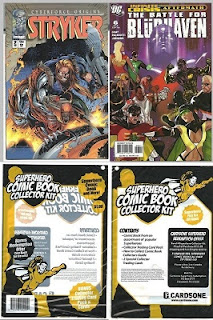 STRYKER ( IMAGE COMICS - VOL 1 NO 2 FEB. 1995 ) and INFINITE CRISIS AFTERMATH: BATTLE FOR BLUDHAVEN PART SIX ( DC COMICS - AUG. 2006 ) from the DOLLAR TREE. Also pictured above is one of the bags the comics are sold in.

While at one of my local DOLLAR TREE stores, I found two cardboard displays filled with comic books.

Each bag had one old comic, an old pack of trading - or game - cards, and two loose cards. Plus a mail order booklet by a company called CARDS ONE.

I'm only showing two of the comics, because the third one had disgusting fingerprints all over the front and back covers. So, I gave it away. I also gave all the loose Elvis cards away.

FYI - In previous years these packs contained TWO comics and cards. Now it's just one comic.

It's usually superheros, but sometimes I'll find something that actually appeals to me.
Posted by CVB at 12:43 PM 3 comments: