IF MARRYING TWINS IS WRONG, THEN I DON'T WANT TO BE RIGHT - PART 2

Oh the eighties, what a decade, and what a wasted opportunity!

I truly believe, there were more drugs and debauchery during the eighties, than in all the twenties, thirties, sixties, and seventies combined! 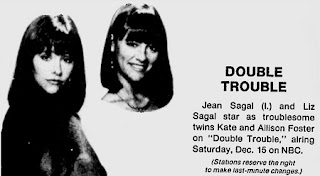 Newspaper ad for DOUBLE TROUBLE from 1984

Anyway, I was older, and so were the twins.

This time the ladies were real life twins Jean and Liz Sagal.

I remember watching them on a crappy television show called DOUBLE TROUBLE.

I was nuts about them!

And yes, I know they're Katey Sagal's sisters. 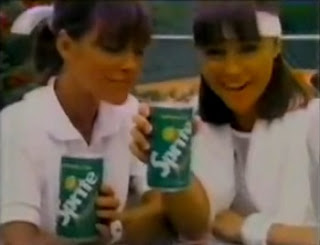 Screengrab above of Jean and Liz in a SPRITE commercial

I also remember seeing them in a few tv commercials, and other tv shows.

Apparently, they're both still working in the biz.

Jean has appeared in many tv shows. She's also directed a lot of episodes for shows like, JUST SHOOT ME!, TWO AND A HALF MEN, and 2 BROKE GIRLS.

Meanwhile, Liz was a writer and producer on SONS OF ANARCHY. She's also written for many other tv shows. Plus, she's also appeared in theatrical films and a bunch of tv shows. 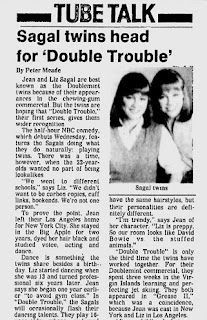 I had every episode of DOUBLE TROUBLE on several VHS tapes. But, they've long disappeared.

The show has never been released on region one DVD, or in any other region ( as far as I know ).
Posted by CVB at 10:15 AM No comments:

IF MARRYING TWINS IS WRONG, THEN I DON'T WANT TO BE RIGHT - PART 1

Screengrabs above are from the movie WHISKY & VODKA

Once upon a time, I was a mere tater-tot with big potato dreams.... One of those dreams was to marry twins.

"Hey, that's NOT legal!".... Thanks for reminding me! What are you going to do next?... Tell me the Easter bunny, and leprechauns, aren't real?! Gee-whiz!... Thanks a lot, ya fuckin' party-pooper! 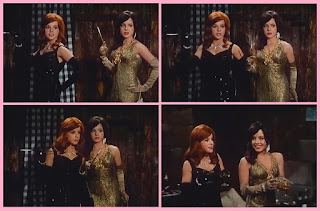 It was the late sixties and early seventies, and anything was possible. So, when I saw some twins in a movie called WHISKY & VODKA, I flipped-out. 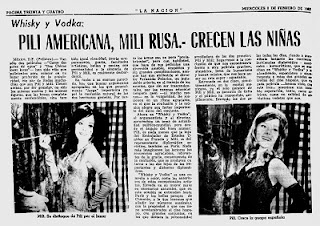 The story involves a mix-up of two unrelated young ladies that look identical.

They're both daughters of diplomats ( one American and one Soviet ). This results in confusion, and wackiness. As I watched them, I knew, I wanted to do more than just play MONOPOLY with them... ha-ha-ha. 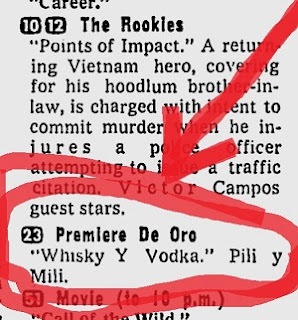 I've been told the twins are both alive and well ( I can NOT confirm this information ). 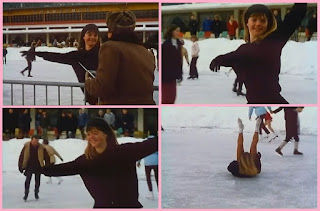 The mysterious and cute ice-skater... During one scene a cute lady skates and falls. I didn't know who she was, and after all this time, I still don't know. Her character is NOT listed on the IMDB.

Recently, I found WHISKY & VODKA on VHS, but the tape was shredded. Plus, I think it may have been a bootleg.

I haven't been able to find a region one DVD for this movie, and I don't know which company distributed it in theaters, or for television. 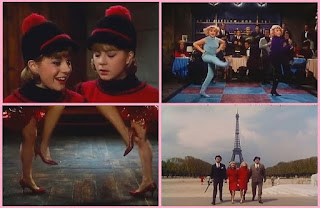 The entire movie was online, but was taken down for "Copyright infringement". Hopefully, it will be uploaded again by someone else.....
Posted by CVB at 12:24 PM No comments: Liz Renay is the only cast member I'm familiar with.

I saw this movie on VHS back in the eighties, but I don't remember anything about it.

I also don't remember if the tape was legit. 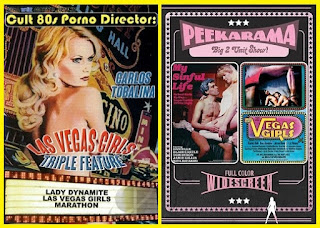 LAS VEGAS GIRLS has been released at least two times on DVD. Once by ALPHA BLUE ARCHIVES ( as part of a triple feature ), and another time by VINEGAR SYNDROME ( as part of a double feature ).
Posted by CVB at 10:25 AM No comments: 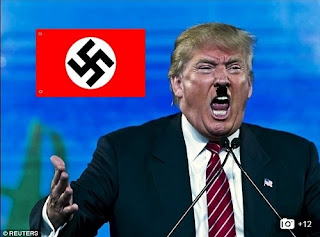 The above photo was MODIFIED by yours truly..... NONE of this nation's tribes gave Trump permission to come here, so deport his ARROGANT and USELESS ass back to Europe or North Africa, whichever is appropriate!

Don't get me started on how this PUSSY-BIGOT-COWARD AVOIDED SERVING IN VIETNAM.

TRUMP has NO right to take the moral high ground on any subject.

Anyway, as I've said before, it's TWO-LEGGED-SACKS-OF-SHIT like him, that are doing the raping and GETTING AWAY with it.

"Trump's lawyer made furious threats against reporters who resurfaced the allegations"

Just for the record, I think Ivana Trump is just as fucked-up as he is. 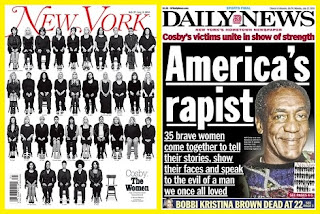 Want a QUAALUDE flavored PUD-DIN-POP?!... Oh come on, it'll be a funky adventure! 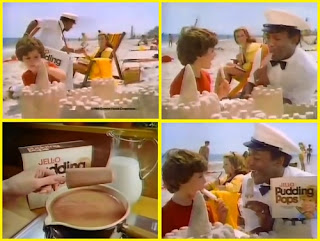 Screengrabs of Bill Cosby in an old JELL-O television commercial... I wonder what he's thinking of, as he hands her that pudding pop.

"Kraft Foods, maker of JELLO Pudding Pops, wants to distance itself as far away as possible from entertainer Bill Cosby"

“The shape and color of some of our Pudding Pops have taken on negative associations through no fault of our own,”

“We don’t want people to think of Bill Cosby when they put a Pudding Pop into their mouths, or the mouths of their children"

I can't stop laughing when I read those quotes. 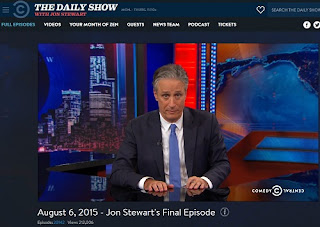 Screengrab of Jon Stewart on his last show

He's smart, clever, and hilarious... I will miss him.

Just for the record, I do NOT have cable, but I watch clips of his show online for free. Plus, his last episode was also online for free ( at the official DAILY SHOW website ). 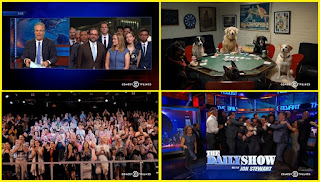 One of my favorite lines of his last show ( in regards to BULLSHIT from our beloved government )... "IF YOU SMELL SOMETHING, SAY SOMETHING".....

This has been a public service announcement..... We now return you to our regularly scheduled program.....
Posted by CVB at 12:54 PM No comments: