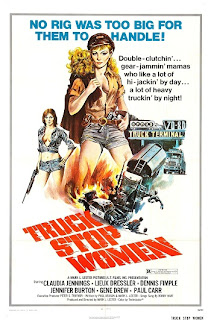 This is one of my favorite posters.

When I was young, I tried to watch every movie that the late Claudia Jennings appeared in.

I haven't seen this movie since my youth, so I can't give you detailed memories. But, I can tell you that I liked it a lot.

I don't remember which company released it on VHS.

As I write this, there is still NO legit region one DVD of this movie. However, two grey-market companies, J4HI and DESERT ISLAND FILMS, offer this movie on DVD-R.
Posted by CVB at 3:12 PM No comments: 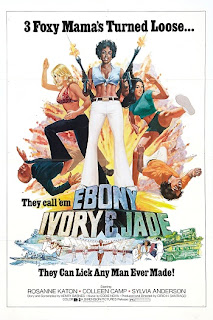 Another great looking poster from the grindhouse / drive-in era.

What's not to like?... It's three hot chicks ready to kick ass!

I haven't seen this movie since my youth, so I don't remember much about it.

Also known as SHE DEVILS IN CHAINS.

Do NOT get this movie confused with a made-for-tv-flick called EBONY, IVORY AND JADE.

I'm almost certain this was released on legit VHS, but I can NOT remember which company it was.

A region one DVD was released by ANCHOR BAY ( OUT-OF-PRINT ).
Posted by CVB at 3:07 PM No comments: 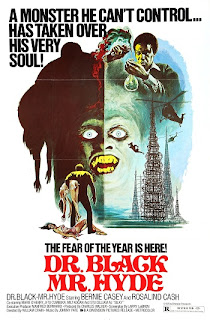 I don't remember if I liked this movie, but I do love the trailer.

This is a true grindhouse / drive-in era flick.

DR. BLACK, MR. HYDE stars Bernie Casey. This man has been in a TON of movies and TV shows. I still remember his character in REVENGE OF THE NERDS.

QUOTES FROM THE TRAILER.....

"Shot full of lead, and he still ain't dead!"

I don't know, if this movie was ever released on legit VHS.

VCI ENTERTAINMENT released this movie on region one DVD.
Posted by CVB at 3:04 PM No comments: 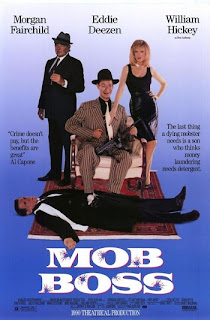 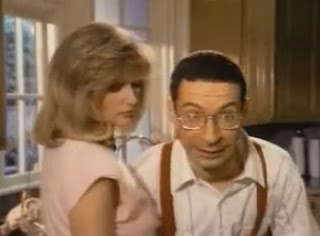 It was written by T.L. Lankford, and directed by Fred Olen Ray.

It's been a VERY VERY LONG TIME since I've seen this movie. 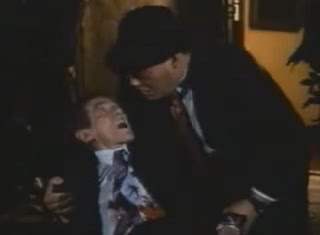 Why?... Because it's still NOT available on legit region one DVD!

There is NO solo DVD, or BLU-RAY / DVD combo, or MOD-DVD. It's NOT even available as part of a multi-movie pack.

The MOB BOSS deserves a parole! 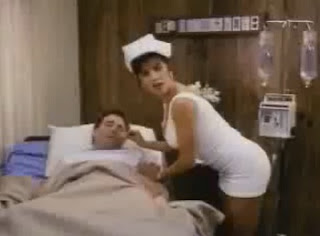 I don't think MOB BOSS has even aired on any of the "free" tv channels.

A VHS was released by VIDMARK ( AKA LIONSGATE ). 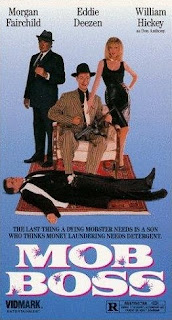 Unless you can find this on grey-market disc, the VHS is your only option.
Posted by CVB at 4:25 PM No comments: 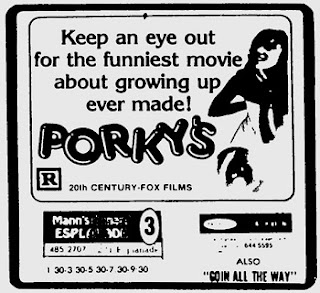 If I remember correctly, I was still in school when this movie was released.

I've never forgotten the appearance of SUPER-CUTE Jill Whitlow, or the famous fullfrontals.

This movie is harmless fun. That's all.

The amount of HATE that most professional critics spat at this movie was ABSOLUTELY ABSURD!... They said many vile things. NOT just about the movie, but about it's writer / director Bob Clark ( 1939 – 2007 ).

Keep in mind, that many of these same critics, PRAISED that FUGITIVE-COWARD-AFTERBIRTH called POLANSKI!... That's proof of their TWISTED sense of values.

So who had THE LAST LAUGH?... It sure-as-hell WASN'T the critics! This movie spawned two sequels!

NO one is going to remember those SHIT-HOLE CRITICS! But, people have NOT forgotten about PORKY'S.

All three PORKY'S were released on VHS by FOX.

PORKY'S has been released on legit region one DVD many times, and in many forms - solo discs, and as part of collections ( by FOX ).

It has also been released on BLU-RAY by FOX.
Posted by CVB at 7:09 PM No comments: 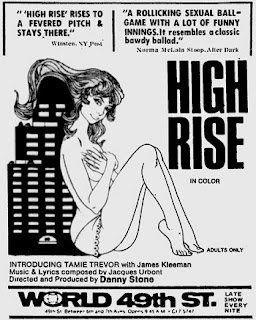 I don't remember much about this movie.

THE UNSEEN was also written and directed by Mr. Steinmann. Plus, he also directed and co-wrote SAVAGE STREETS.

I don't know if HIGH RISE was ever released on VHS.

A legit DVD was released in the United States by VIDEO-X-PIX.
Posted by CVB at 6:59 PM No comments: 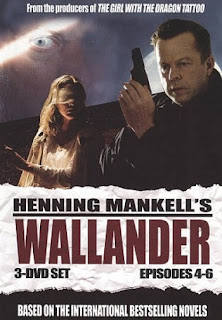 Kurt Wallander is a Swedish cop. Not only does he have the normal burdens of a police officer, but he also has the additional baggage of worrying about his daughter Linda. She is also a police officer ( in the same precinct ).

There are several versions of this show. The version I like, and recommend, stars Krister Henriksson and airs on MHZ NETWORKS in the United States. Do NOT confuse it with the sanitized soap-opera version starring Kenneth Branagh. That version airs on PBS in the United States. There's also at least one other Swedish version, starring Rolf Lassgard.

MASTERMIND is my favorite episode so far, and that's what I'm going to focus my attention on.

The killer - Lothar Kraftzcyk - is a genius, and a master of disguise. His motive is revenge. There are plenty of genuine surprises, and frights.

Simple-minded slashers like Michael Myers and Jason Voorhees, do NOT scare me, and they never have. Lothar Kraftzcyk, the character portrayed by Michael Nyqvist, DOES scare me. He's genuinely chilling. 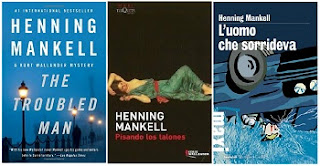 The character of Kurt Wallander is from a series of books written by Henning Mankell.
I do NOT know if this series is directly based on any of the books. 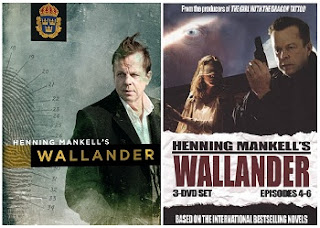 Region one DVDs of the Krister Henriksson version, have been released by MUSIC BOX FILMS and also by MHZ NETWORKS.
Posted by CVB at 12:14 PM No comments: 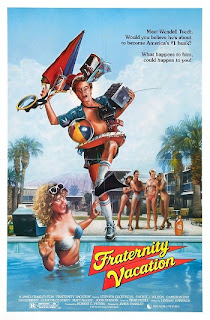 So do DALLAS alums, Sheree J. Wilson and Leigh McCloskey.

I've said it before and I'll say it again, in addition to being a fine actress, Barbara Crampton is one of the most GORGEOUS women to ever appear on screen!

I really like the scenes with Amanda Bearse and Stephen Geoffreys.

FRATERNITY VACATION is a ton of harmless fun.

A solo region one DVD was released by ANCHOR BAY and has one of the SHITTIEST looking DVD covers ever! Why didn't they use the fucking poster art?! The disc is now OUT OF PRINT.

FRATERNITY VACATION was re-released on region one DVD by IMAGE ENTERTAINMENT. It's part of a double feature with REFORM SCHOOL GIRLS. At least IMAGE had the sense to use the poster art from both films.
Posted by CVB at 11:56 AM No comments: 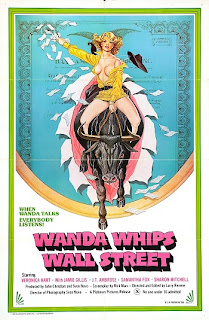 Ahhh... Wall Street, the most felon infested part of the United States. Oh well, at least Wanda is giving them a taste of their own medicine.

This is one of my favorite GRINDHOUSE / DRIVE-IN era posters. I absolutely love it!

Wanda - Veronica Hart - is a corporate raider. She wants to play in the big leagues, so she heads to New York and tries to steal a big company. 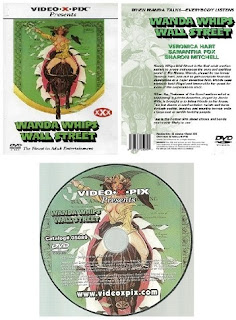 I don't know which company released it on VHS.

VIDEO-X-PIX released it on region one DVD, and they use poster art for the cover.

It's presented in FULLscreen, and the only extras are trailers.

There's no booklet, but it does have a color advertising card.
Posted by CVB at 11:47 AM No comments: 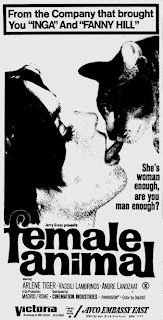 Most of my GRINDHOUSE ERA AD posts are short, but this one is special.

It is NOT a European film. It's from the U.S.A., and filmed in Puerto Rico.

FEMALE ANIMAL is more soap opera than sleaze-fest, but that's ok. I like it even more because of it.

As a kid, I always looked forward to watching Ms. Farber. It didn't matter if it was on television or at the theater.

Let me say the obvious, even without makeup, Arlene Farber was absolutely beautiful.

She was extremely photogenic, and there always seemed to be a lot going on behind those mesmerizing eyes.

How many times have you seen something that was filmed underwater, and it was so dark and muddy that you couldn't see what the hell was going on?!

You will NOT experience that while watching this movie. The underwater scenes in FEMALE ANIMAL are incredibly clear.

There seems to be some mystery surrounding both Arlene Farber and Jerry Gross.

He was an influential, and incredibly underappreciated person in the indie film world.

The GRINDHOUSE / DRIVE-IN era wouldn't have been the same without him.

As for Ms. Farber, I found a website that seems to be run by her, but there's no proof that it's really Arlene Farber. Do I need to remind you folks about all the PHONIES masquerading as other folks?

As I write this - January 2013 - the website does NOT seem to have been updated in years.

Anyway, a few of the photo galleries contain pictures of a woman that appears to be her. There are also photos taken by her ( I think she's a professional photographer ).

Plus, a gallery is devoted to the late Jerry Gross with comments about him. 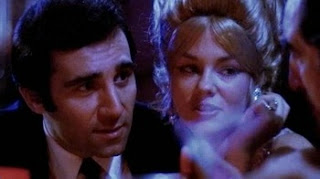 Tony Lo Bianco and Arlene Farber in THE FRENCH CONNECTION 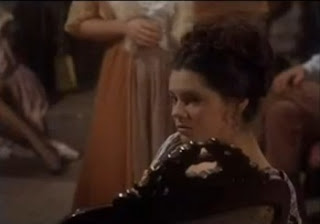 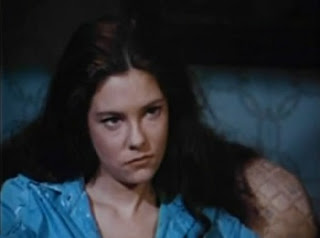 Arlene Farber in ALL THE KIND STRANGERS Arlene Farber in TWO GIRLS FOR A MADMAN 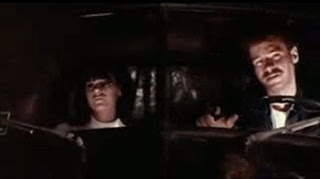 
I have no idea if FEMALE ANIMAL was ever released on legit VHS.

However, you can find FEMALE ANIMAL on region one DVD by ALTERNATIVE CINEMA. It's paired with another Arlene Farber and Jerry Gross flick called TEENAGE MOTHER.
Both movies share a single sided disc. 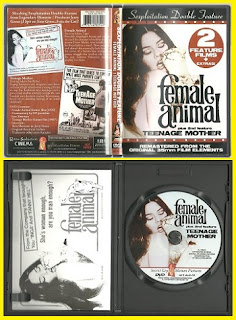 FEMALE ANIMAL is presented in WIDEscreen, while TEENAGE MOTHER is FULLscreen.

The extras are as follows...

A two sided insert card featuring poster art for both FEMALE ANIMAL and TEENAGE MOTHER.
Posted by CVB at 10:53 AM 1 comment: 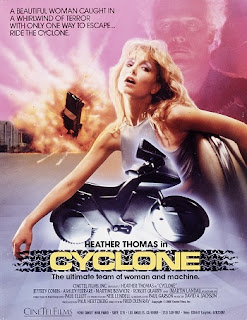 I like this poster a lot, and I love the movie.

Heather Thomas and Jeffrey Combs star in this fun flick.

FYI: The solo DVD of CYCLONE has been OUT-OF-PRINT for a while. However, CYCLONE will be re-released soon, as part of a four movie set called ACTION PACKED MOVIE MARATHON ( SHOUT FACTORY ). It's a two disc set. At this time, I don't know if they will be double or single sided discs, and I don't care.

EXTERMINATOR 2 ( Robert Ginty and Mario Van Peebles ) - In my opinion, part two, is much more fun than part one ( which took itself a little TOO seriously ). It will have one extra... QUOTE FROM THE SHOUT FACTORY WEBSITE "Exterminator 2 Audio Commentary with director Mark Buntzman and actor Mario Van Peebles"

EYE OF THE TIGER ( Gary Busey, Yaphet Kotto, and William Smith ) - I don't remember anything about this movie. 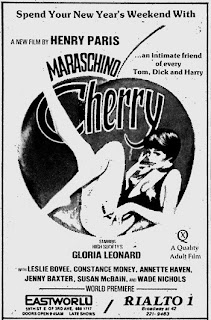 It has been a VERY long time since I've seen MARASCHINO CHERRY. So long in fact, that I don't even remember if I liked it!

MARASCHINO CHERRY was released on DVD in the United States by VIDEO-X-PIX.