THE RIDE OF HER LIFE 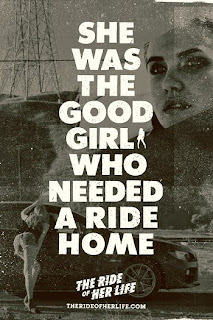 THE RIDE OF HER LIFE is a commercial for the 2015 SUBARU IMPREZA WRX STI.

It's filmed in the style of a grindhouse era exploitation trailer.

A sheriff's daughter runs away with a bad boy. It's a simple and entertaining ad, that's completely harmless!

I love it... And the more it gets attacked, THE MORE I LOVE IT.

Remember OLD MILWAUKEE'S SWEDISH BIKINI TEAM, and what happened to them?!

There's NOTHING offensive about this commercial, period!

WRITTEN BY ?
DIRECTED BY ?
CINEMATOGRAPHY BY ?
EDITING BY ?
STUNTS BY ?

Kayslee Collins as the sheriff's daughter

Bucky Lasek as the drifter

Michael Wiles as the sheriff, and Jenette Goldstein as his wife 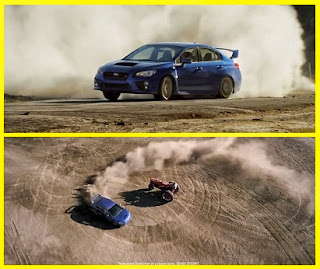 SUBARU WRX STI as itself

I would love to get my hands on promotional material related to this campaign ( postcards?.. posters? ). But, I do NOT know if SUBARU dealers have any memorabilia related to this fake grindhouse trailer. I hate walking into car dealerships - it's far less painful to visit a dentist.....
Posted by CVB at 3:49 PM No comments: 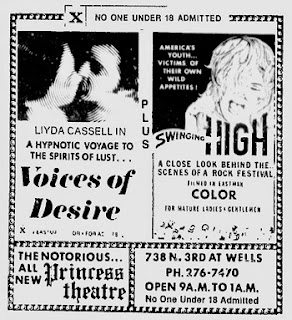 VOICES OF DESIRE seems to have been completely forgotten.

It's a low-budget supernatural sex thriller, and it's one of my favorite Chuck Vincent films.

The version I watched was SOFTcore. I don't know if a HARDcore version exists. 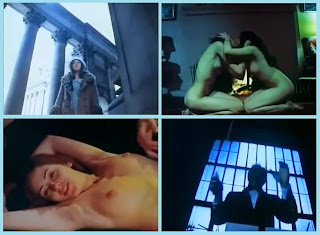 This movie has some beautiful shots in it, and Sandra Peabody - aka Sandra Cassell - does a great job.

I don't think Chuck Vincent received very much respect during his lifetime, and that's a shame.

I also liked Mr. Vincent's LOVE TRUCK ( aka BLUE SUMMER ). ALTERNATIVE CINEMA released it under the aka of BLUE SUMMER ( in a pressed two disc set ). It's part of a four movie collection called SKIN IN THE 70S. 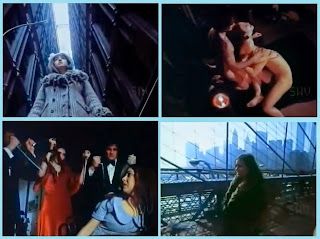 SEX APPEAL is another hard to find Chuck Vincent film. VESTRON released SEX APPEAL on VHS ( in the United States ). I don't think it was ever released on legit region one DVD. I think LIONSGATE may own the rights to it, but I can NOT confirm this as fact.

You may be able to find SEX APPEAL on grey-market DVD.

As for VOICES OF DESIRE, I don't know if it was ever released on legit VHS, or BETA. I doubt it's ever been released on a region one "pressed disc".
Posted by CVB at 10:26 AM No comments: 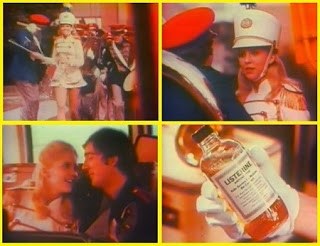 Screengrabs of Nancy Allen in a LISTERINE commercial... I don't think blond hair flatters her ( but I still think she looks adorable ).

She's one of my favorite actresses.

Ms. Allen also appears in a underrated time-travel flick called THE PHILADELPHIA EXPERIMENT. It was released on region one DVD by IMAGE ENTERTAINMENT. An out-of-print version was also released by ANCHOR BAY. 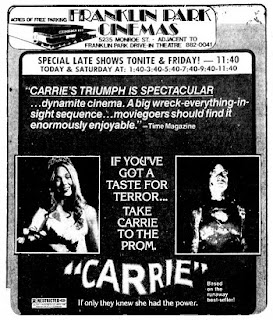 How can anyone forget about her in CARRIE ( the original ). It was released on region one DVD by MGM many times.

CARRIE was also released by MGM as part of a triple feature ( with THE RAGE: CARRIE II and CARRIE from 2002 ).

SWEET REVENGE is a rare film. It has NOT had a legit region one DVD release.

DRESSED TO KILL, and BLOW OUT are easy to find on region one disc ( both released by MGM ).

Another VERY RARE Allen film is the R rated remake of FORCED ENTRY ( aka THE LAST VICTIM ). It has NOT been released on region one DVD.

Of course, you can't forget her in ROBOCOP ( the original ). It has been released on region one DVD many times - as a solo disc by IMAGE ENTERTAINMENT ( out-of-print ), and also by MGM.

You can also find it as part of a double feature by MGM / SONY ( paired with THE TERMINATOR ).

Also as part of a triple feature by MGM ( with MAD MAX and THE TERMINATOR - this may have been a WALMART exclusive ). 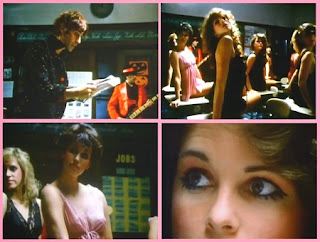 CENTERFOLD is one of my all time favorite music videos.

I've been trying to identify some of the women in the video. Unfortunately, it's been an uphill battle. 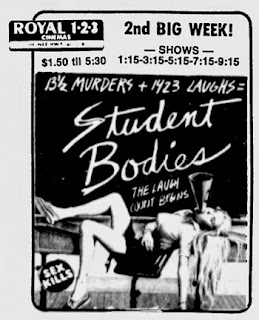 One of those ladies is called, Kristen Riter. She appeared in the movie called STUDENT BODIES.

Do NOT confuse her with another actress called Krysten Ritter ( from BREAKING BAD and DON'T TRUST THE B---- IN APARTMENT B ). 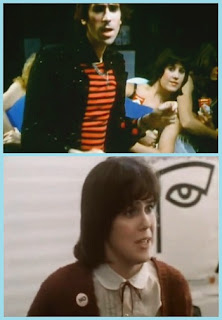 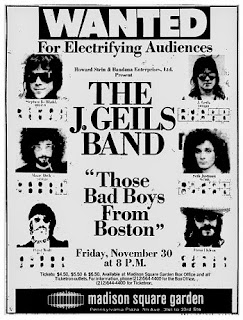 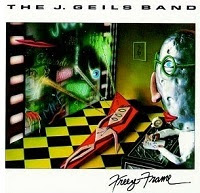 CENTERFOLD is from their album entitled FREEZE FRAME. It was released on vinyl, cd, and cassette. 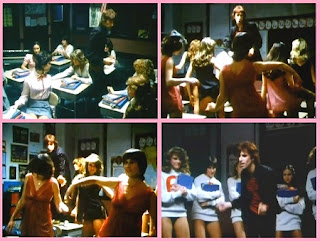 I don't know if their music videos ever had a legit VHS release.

As for region one DVDs, I can NOT find a legit release ( bootlegs only ).
Posted by CVB at 2:15 PM No comments: 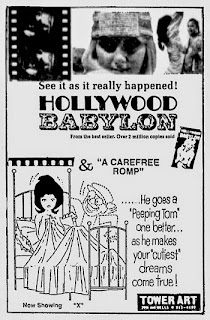 HOLLYWOOD BABYLON is a film from the early 1970s. It's based on the book of the same name ( by Kenneth Anger ).

It's about celebrity scandals, and contains archive footage, reenactments, and more.

It's a twisted, yet entertaining movie. Just DON'T take it too seriously.

There's a lot of truth in the film, but there's also a lot of fiction.

It's been a very long time since I've seen this movie, so I don't remember very many details.

Adult film stars, Suzanne Fields, Andy Bellamy, and Sandy Carey supposedly appear in this film ( as does Uschi Digard - I don't care about her ).

Like I said before, it's been a very long time, so I don't really have a lot of vivid memories of the film. 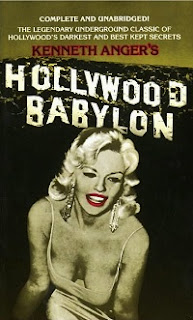 As I write this, HOLLYWOOD BABYLON is still in print ( mass market paperback ).

I saw this film on YOU TUBE a few years ago, and I do not know much about it ( I can NOT find an IMDB page for it ).

I remember watching the 1970s version on VHS, but I can NOT remember if it was a legit tape.
Posted by CVB at 10:37 AM No comments: 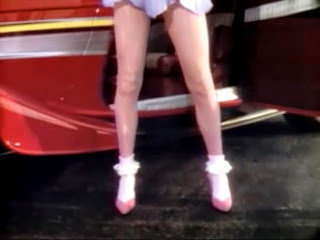 A brief salute to one of my favorite music videos.

LEGS was performed by three harmonic hombres / philosophers by the names of Billy Gibbons, Dusty Hill, and Frank Beard ... With a special appearance by their highly modified 1933 FORD COUPE. 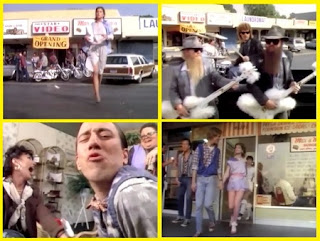 Screengrabs from the LEGS music video 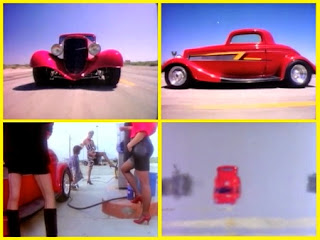 Screengrabs of their famous FORD COUPE in GIMME ALL YOUR LOVIN'

ZZ TOP made a bunch of great music videos that aired on MTV during it's heyday.

Two of my favorite videos were ROUGH BOY, and LEGS.

ZZ TOP also appear in BACK TO THE FUTURE III 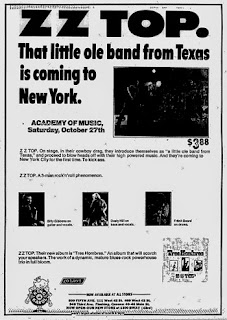 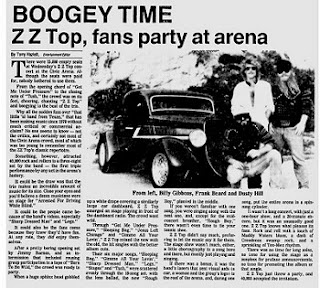 LEGS is from their album entitled ELIMINATOR. It was released on vinyl, CD, and cassette.

I don't know if ZZ TOP's music videos were ever released on legit VHS.

However, they were released on a region one DVD. The disc was called GREATEST HITS ( released by WARNER BROS ).
Posted by CVB at 4:41 PM No comments: 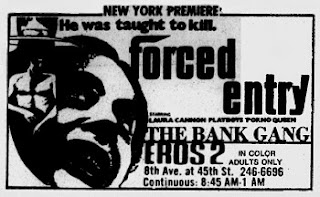 Newspaper ad for the original version

Most of the folks that bash this film, admit, they've NEVER SEEN IT!

This movie is about a mentally damaged veteran that murders women.

It's a real movie, with real sex.

FORCED ENTRY was written and directed by Shaun Costello, and stars Harry Reems.

You do NOT feel sorry for the killer, and you do NOT have FUN watching him murder.

That's the EXACT OPPOSITE of the message you'll receive while watching a typical slasher flick.

You SHOULD be sicken by folks that GET-OFF on slasher flicks. Violence is NOT supposed to be a TURN-ON.

Once again, this movie is MEANT to assault your senses! 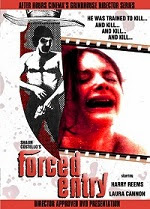 I owned a bootleg VHS in the early eighties. I don't know if a legit version was ever released.

ALTERNATIVE CINEMA ( AFTER HOURS ) released this movie on region one DVD. 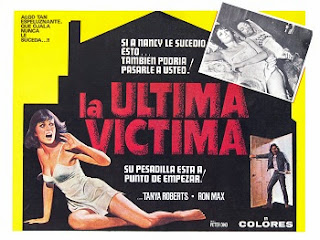 I like this movie, and I make NO apologies for feeling that way.

Contrary to what professional critics say, this is actually a decent movie.

Tanya Roberts, and Ron Max do a great job.

FYI: I hate hearing people call this a "horror" movie, it's a THRILLER. 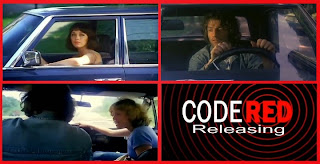 I remember owning a VHS tape of this movie, but I do NOT remember the name of the company that released it.

As far as I know, this version has NEVER had a legit region one DVD release.

I've seen plenty of grey-market discs for sale ( usually OVERpriced ). They're usually crap, so do yourself a favor, and stay away from them.
Posted by CVB at 5:15 PM No comments: