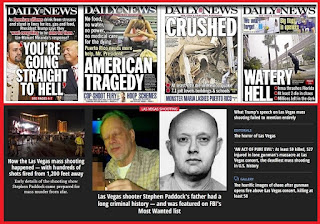 I don't know what to say anymore... I really don't. It's like people all over the country - and the world - are talking to brick walls.

I feel FUCKING EXHAUSTED - both mentally and physically. It's been a NIGHTMARE of a year for far too many people - myself included.

I hate hearing people say they are sending their thoughts and prayers - it's condescending and useless. It has NEVER stopped BAD THINGS from happening, and it has NEVER cured anyone or put food in their stomach!

What is it going to take for that INSANE-NAZI-AFTERBIRTH and his JUNTA, to be removed from office?!

As if wanting to start a nuclear war with that other lunatic in North Korea isn't bad enough, everyday brings more DEPLORABLE BEHAVIOR.

Speak up!.. If you're willing to give up your rights, then you deserve to lose them!

This will be my last post until further notice..... 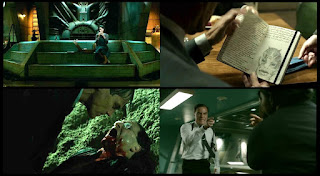 SHAPE OF WATER - I really want and NEED to see Guillermo del Toro's new movie. I think there is an urgent need for an escapist movie aimed at ADULTS. I got genuinely excited when I read about this film. SHAPE OF WATER stars, Sally Hawkins, Michael Shannon, and others. 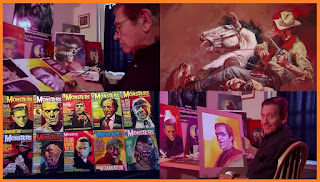 BASIL GOGOS - As you may know, Basil Gogos passed away. His art appeared on various types of publications and other things. Most people remember him for his FAMOUS MONSTERS magazine cover art. Do NOT confuse the GENUINE version with the BULLSHIT new version of this magazine.

BEHIND THE BURLY Q - True burlesque was before my time. The closest I'll ever get to watching burlesque is to attend one of the adult themed shows in Las Vegas - such as X BURLESQUE, X COUNTRY, or X ROCKS.

My only complaint involves the photos ( all black and white ). Many of them tend to be on the small side. Plus, some are dark and blurry. I'm NOT blaming the writer or publisher. The materials they had to work with were probably old and in poor condition. I'm just happy it had photos. 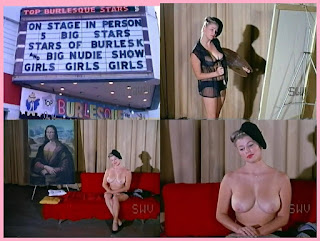 LULLABY OF BARELAND - This is one of my favorite nudie-cutie flicks of all time!

At the start of the film, we meet a housewife ( Delores Carlos ) and her husband ( Charles Aldrich ).

The wife thinks her husband is more interested in the newspaper than her, and he thinks she would rather play card games.

When she leaves the house, he hops into their Cadillac and heads to the local burlesque house. 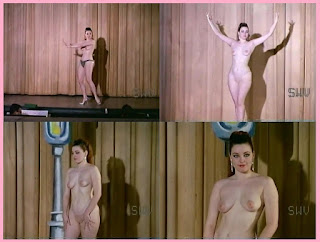 The husband watches a few striptease acts and a comedy sketch. Then he makes a play for a hot looking blonde.

Anita Adams is my favorite lady in this film. I think she was really cute.

Virginia Bell may have been voluptuous, but I didn't think she was very attractive, and yet, I could not look away... ha-ha-ha. 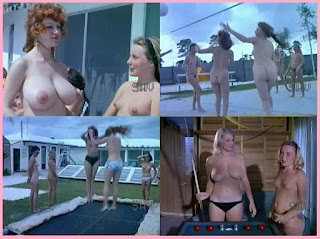 While he's watching the stripteasers, his wife is at a nudist colony hanging out with Anne Howe and her flesh twins. There's also a bunch of other cute ladies at the camp.

One scene is spoiled by the appearance of an annoying twerp on a trampoline... Get lost you little bastard!... You're ruining the scenery!

There's more, but it's the first two segments of BARELAND that interest me the most.

As I've said before, I love this film, I really do.

VHS? - I don't know if this was ever released on legit VHS.

DVD? - Unfortunately, LULLABY OF BARELAND is only available via DVD-R and download ( from SOMETHING WIERD ). In my opinion, this film deserves to be released on pressed disc.

GO AWAY BEN, I ALSO WANT TO RUN AWAY WITH ELAINE - I think I've watched THE GRADUATE at least five or six times during the past month ( on THIS TV and MOVIES TV ). As a kid, I saw THE GRADUATE on television during the early seventies, and after all this time, I still LOVE THIS FILM. Those Simon & Garfunkel songs have stayed in my mind since I first saw the movie ( I mean that in a GOOD way ).

Hello darkness, my old friend
I've come to talk with you again
Because a vision softly creeping
Left its seeds while I was sleeping
And the vision that was planted in my brain
Still remains
Within the sound of silence
In restless dreams I walked alone
Narrow streets of cobblestone
'Neath the halo of a street lamp
I turn my collar to the cold and damp
When my eyes were stabbed by the flash of a neon light
That split the night
And touched the sound of silence
And in the naked light I saw
Ten thousand people maybe more
People talking without speaking
People hearing without listening
People writing songs that voices never shared
No one dared
Disturb the sound of silence
"Fools," said I, "you do not know
Silence like a cancer grows
Hear my words that I might teach you
Take my arms that I might reach you"
But my words like silent raindrops fell
And echoed in the wells of silence
And the people bowed and prayed
To the neon god they made
And the sign flashed out its warning
In the words that it was forming
And the sign said "The words of the prophets are written on the subway walls
And tenement halls
And whispered in the sound of silence

Blow-off steam in a POSITIVE WAY folks, and try to enjoy life as much as possible.....
Posted by CVB at 11:13 AM 2 comments: