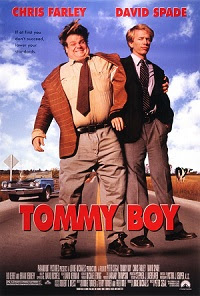 I'm proudly admitting it in public, I LOVE TOMMY BOY! So, to all the trolls..... GO FIST YOURSELVES! 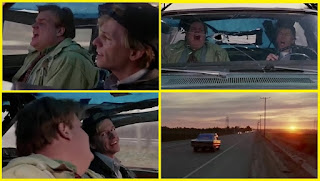 Screengrabs of Chris Farley and David Spade singing ERES TU ( by MOCEDADES )... Love this scene. They're performing it with so much sincerity. That song was - and still is - extremely popular. I saw a YOUTUBE video, of it being sung in Korea by a man with a bunch of backup singers and full orchestra. 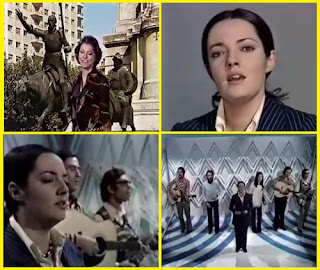 Screengrabs above, a German tv show host introduces MOCEDADES, as they perform ERES TU.... Video found on YOUTUBE and is from the 1970s.

TOMMY BOY was released on region one DVD by PARAMOUNT.

I got a book about NIGHTMARE ON ELM STREET for $4.95 at HAMILTON BOOK.

Just for the record, I'n NOT fond of the rest of the movies, just the FIRST flick.

This SOFTcover version is LOADED with pictures and info.

While I was at one of my local DOLLAR TREE stores, I found three mass market paperbacks.

HUNT: BEYOND THE FROZEN FIRE - I have not had the time to read this book yet.

It's written by Christa Faust.

THE NICE GUYS - This is a movie tie-in. I did not see the film, but I did enjoy reading the book.

It's written by Charles Ardai - he's one of my favorite writers.

FRINGE: THE BURNING MAN - This is a television tie-in for a show that aired on the FOX network. I found it much more entertaining than the episodes I watched.

It's written by Christa Faust ( I like the way she writes ).

I haven't purchased an issue of TV GUIDE since the nineties. It's much bigger now. I preferred the small sized original version. Anyway, I got the issue with Johnny Galecki and Kaley Cuoco on the cover. This issue has an article on the BIG BANG THEORY.

In regards to the tv listings, it's useless to me. Why?... Because, most of the channels listed are pay channels, and I do NOT subscribe to any of them. It's over-the-air or nothing! Just for the record, most of the people I know, have eliminated their cable service.

While I was attending a local auto show, I signed up for a FREE subscription to MOTOR TREND magazine. I've been a GEARHEAD for most of my life, so I didn't have to think about this. plus, I can't argue with the price, can I? 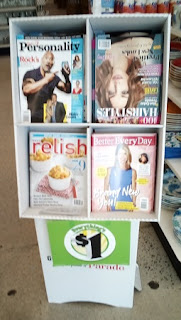 At DOLLAR TREE, I saw four magazine titles that I had never seen before. They're all from last year, and they were in a special cardboard display.

Each periodical seemed to be compiled from previously published stories, that appeared in PARADE ( newspaper supplement ).

The subjects were food, hairstyles, health, and entertainment.

Above are photos of southern California yearbooks from 1980 and 1981 ( photo source EBAY ).

If I could travel back in time, what would I do differently? Well, I would try to correct all the mistakes I've made. However, I would most likely make NEW mistakes. I really feel, that sometimes bad things happen for a good reason - and living through bad times makes us better people.

I realize we all do foolish things when we're young. I can NOT take back the stupid comments I made to a girl I cared about. The asinine gibberish that spilled out of my mouth, were the last words I said to her.

Both of us, were part of a special program that was held at a local airport, and the students were from different schools throughout the county. Anyway, she never showed up for graduation ( it was separate from regular school graduation ). I never saw her again. She has entered my mind frequently, during the past few years.

I don't know if she's alive and well, and I've come to the realization that I'll probably never have closure in regards to this matter. This is important to me, for reasons that I don't want to share.

I've tried to find her and others from this class. But, I've had NO luck.

I've been told to use FACEBOOK, but I'm NOT going to give my private information to such a NEFARIOUS COMPANY. 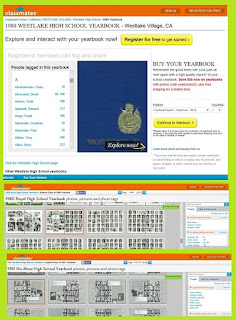 It seems like ninety-five percent of the reviews I've read for CLASSMATES have been NEGATIVE. The few good reviews must have been written by delusional douchebags on drugs... or maybe employees of the company?

QUOTE below is from the CHICAGO READER ( By Michael Miner and published on Jan. 20, 2011 )

"Classmates made news last August, it wasn't flattering. Andrew Cuomo, then attorney general of New York, announced Classmates was one of a handful of sites that would each pay $2.1 million in fines and restitution over fraudulent hidden fees"

They post digital versions of high school YEARBOOKS online. According to the complaints I've read, they also sell very LOW quality reprints that people can NOT get refunds for.

Apparently, many of the yearbooks they have posted online, have very personal inscriptions in them.

QUOTE below is from the CHICAGO READER ( By Michael Miner and published on Jan. 20, 2011 )

"nestled among the golden oldies of our collective memories is the jagged residue of love, longing, and loss. These are the complicated and eternally painful memories that are no one's business but our own"

In regards to the special class I attended, our instructor had taken a class photo, but I never got a copy. In addition, my graduation certificate had my name spelled incorrectly. Well, I finally got a replacement certificate, but they don't know anything about the class photo.

They also could NOT provide me with a list of my classmates. So, that was my reason for browsing the CLASSMATES website.

Above are photos of southern California yearbooks from 1980 and 1981 ( photo source EBAY ).

They have small thumbnails of yearbook pages and lists of former students. However, it's useless to me. I need to see a photo of the person with their name listed under it. That's the only way I'm going to find out, if they're the individual I'm seeking. Unfortunately, the only way to see the full-sized photo, is by paying them.

There is NO FUCKING WAY am I going to give these assholes my personal information and credit card info!

Just for the record, I doubt they have a legal right to reproduce yearbooks without permission from the schools. 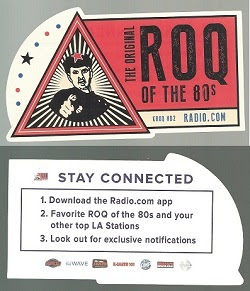 Above is a bumper sticker for KROQ HD-2 ( front and back of sticker ).

Southern California wouldn't have had the same vibe to me, without KROQ ( Los Angeles ).

If you love punk / new wave music, then this is the stations for you.

You can listen to one of their HD channels online for FREE.

The above screengrab is from the DAILY MAIL website ( April 2019 ).

I am so FUCKING TIRED of hearing SOME folks in the mass media referring to many YOUTUBERS as CELEBRITIES.

Lori Loughlin's dum-ass daughter, Olivia Jade Giannulli, is NOT a celebrity. In fact, even her mom isn't much of a CELEBRITY!

Shit-heads like her daughter are also referred to as influencers. Exactly who the fuck do they influence?! It's certainly NOT sane ADULTS! 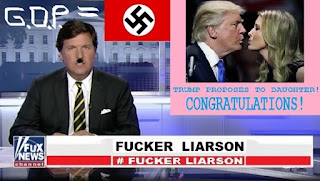 Hope you get a good laugh out of these pictures. 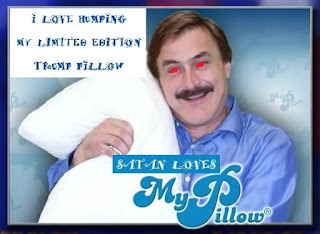 LAUGH and CRY as the world crumbles before your eyes... and SPEAK-UP, or FOREVER HOLD YOUR PEACE.....
Posted by CVB at 2:01 PM No comments: 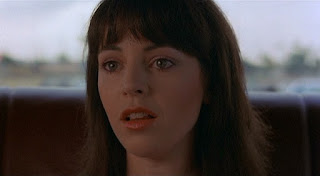 Heidi Holicker was - and still is - the very definition of the word ADORABLE.

Yeah, I know Deborah Foreman got most of the attention in VALLEY GIRL. For me, it was Ms. Holicker that made my heart beat faster.

Her performance feels genuine, not forced.

I am going to focus most of my attention on Ms. Holicker's movies. 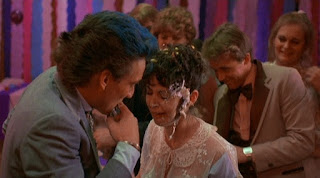 A zillion articles have been written about VALLEY GIRL, and I have nothing new to add in regards to the film. I can only tell you how this movie makes me feel now - as opposed to when it was released.

I feel a combination of joy and sorrow when I watch it. VALLEY GIRL brings back a flood of memories of when I lived in Southern California. Most of those memories were horrible and surreal, but many were also fantastic.

This movie has been released many times. On VHS, DVD and BLU-RAY. I don't know if it was ever released on BETA, CED, or LASERDISC.

My VALLEY GIRL screengrabs were sourced from my SURE THING / VALLEY GIRL double feature DVD. 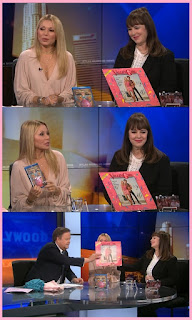 Screengrabs from an interview with E. G. Daily and Heidi Holicker. It took place in 2018 ( channel 5 - KTLA - Los Angeles ). They're discussing the BLU-RAY, their memories of the film, and showing off an original soundtrack album - I would love to own one. 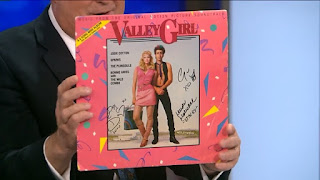 Music from the movie was released on vinyl ( only a few songs were on it ), audio cassette, and CD ( not all of the songs in the movie are found on the tape or CD ). A second CD was released, it contains songs that were NOT on the fist CD. 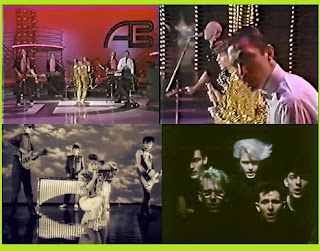 The two screengrabs on top are of SPARKS performing EATEN BY THE MONSTER OF LOVE ( on AMERICAN BANDSTAND ). They performed it LIVE. I repeat, they did NOT lip sync!... NOTE - I don't think it's on the first soundtrack album. Below are screengrabs of the PSYCHEDELIC FURS performing LOVE MY WAY, and MODERN ENGLISH performing I MELT WITH YOU - These songs are all featured in VALLEY GIRL. 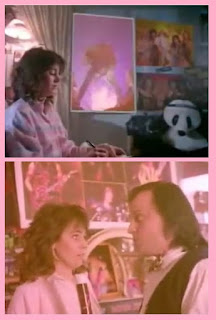 Screengrabs of Heidi Holicker in the humorous music video for LEADER OF THE PACK ( by TWISTED SISTER )... Yes, Bobcat Goldthwait is also in the video. Above is a screengrab from the music video for THIS TIME ( by John Meloncamp ).

Just for the record, I'm NOT fond of Mr. Meloncamp's or TWISTED SISTER's music. 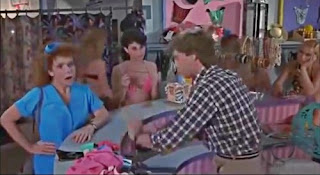 Ms. Holicker's screen time appears to be less than a minute.

This movie was released on VHS.

I don't know if it was released on region one DVD. 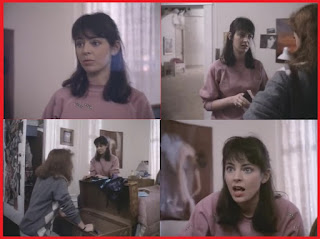 If you've been to this website before, you know how I feel about one-dimensional horror fanatics, YOUTUBE TROLLS, and internet trolls in general.

Trolls and hardcore horror freaks, LOVE bashing this flick - and that makes me like it even more. They prefer seeing blood over female nudity. Violence arouses them. These types of delusional misfits need professional help.

Here's some advice I know they'll ignore... Try watching a NON horror movie - or tv show - for once in your lives. You may also want to try READING A BOOK!... And by book, I don't mean a fucking comic!

Do you think it's possible for those retards to stop jerking-off to Jason Voorhees - or the latest superhero - and join the human race?

RUSH WEEK is available on VHS and DVD.

Screengrab of Heidi Holicker in JOY OF SEX.

I was bored out-of-my-mind by this movie. Now, I know why I had forgotten about it.

Ms. Holicker is only in this movie for one or two minutes.

JOY OF SEX is available on VHS. 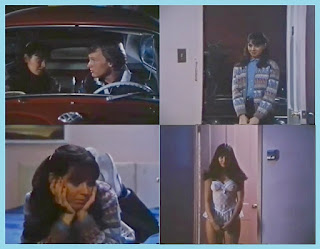 I guess this qualifies as an anthology. Because we're treated to different stories. Slim Pickens and Phyllis Diller appear in this movie, but they don't have a lot to do. But, I still like it.

PINK MOTEL was released on VHS, but as I write this, it still has NOT been released on legit region one DVD.