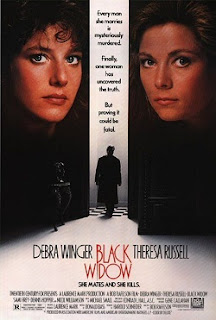 A woman - Theresa Russell's character - marries wealthy men that die soon after. She then inherits their money. That's how she survives. A federal cop - Debra Winger's character - goes undercover to catch her. 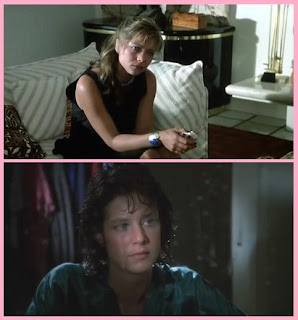 This type of story has been done a bazillion times, but I think this version is very entertaining. Why?... Because of Theresa Russell and Debra Winger. They really seem to be enjoying themselves, and that makes you enjoy the film even more. 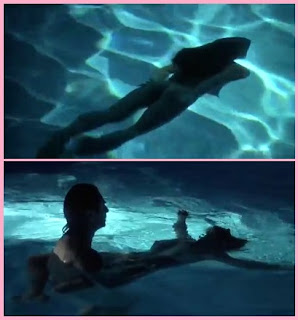 I'll confess, I've always been fond of Theresa Russell. I thought she was hot, and I think she still is. Plus, she's got a great nude scene that takes place in a pool. 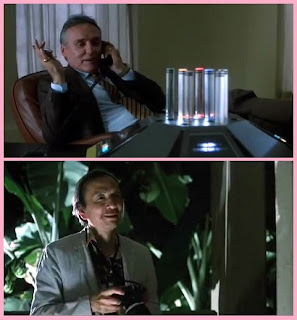 BLACK WIDOW was written by Ronald Bass, and directed by Bob Rafelson. 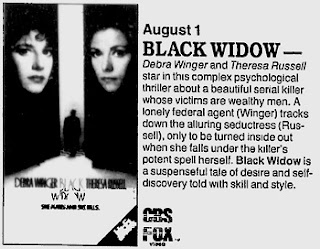 This movie was released on VHS by CBS / FOX.

A region one DVD was released by FOX ( now out of print ).

As for BLU-RAY, it has been released by a company called TWILIGHT TIME. 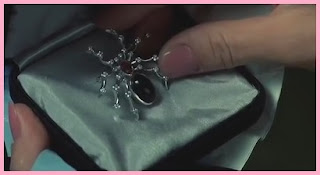 I haven't seen this movie in a long time. So I was happy, when I found it on YOUTUBE. 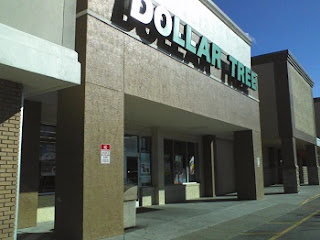 One of my neighborhood DOLLAR TREEs finally put out some new DVDs ( and a few BLUs ). 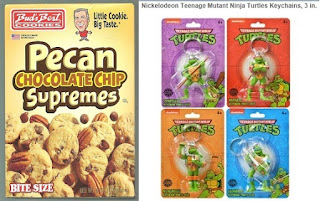 Since I've already written about AMERICAN PIE: BOOK OF LOVE, I'll be sharing my opinions about the other flicks I purchased. 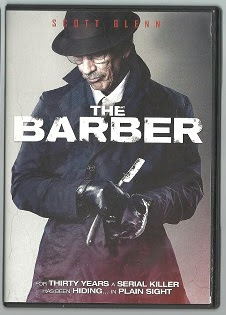 This movie was a great surprise, and I loved it. I knew absolutely nothing about this film. If I hadn't found it on the shelves of my local DOLLAR TREE, I probably never would have watched it. 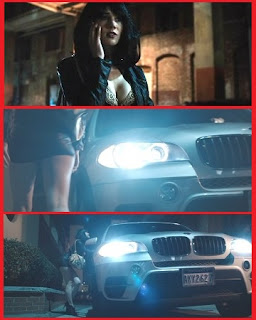 During a flashback, we see a young boy, then we see his father - a cop - who is obsessed with an alleged serial killer. Things go badly, and he is suspended. The suspect is never charged and goes free. His father commits suicide. 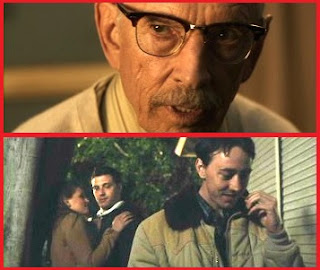 Many years later, the young man - now a recently fired cop - tracks down the alleged killer to a small town. The killer is living under a different name and the townsfolk love him.

The young man has a plan, but will it work?... Or will the shit hit the fan? 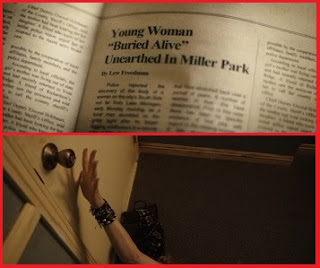 I think THE BARBER is fun, and I feel it's worth watching.

In my opinion, this is a beautiful looking movie.

As usual, Scott Glenn is outstanding. I don't think, I've ever seen him sleepwalk through a role. 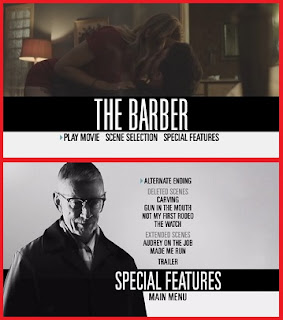 The extras include.... Alternative ending, deleted scenes, and extended scenes.

Trailers on this disc are for, THE BARBER, SOMETHING WICKED, ZARRA'S LAW, and RPG. 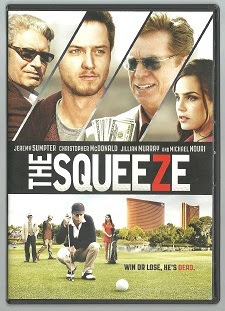 My feelings about this movie are all over the map! Sometimes I hated what I was hearing, sometimes I liked what I was watching, and a few times I felt apathetic. It's NOT a bad movie, but it's also not a good one... it's just there. 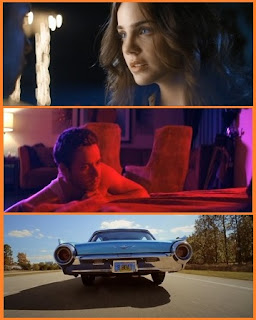 Christopher McDonald, Jeremy Sumpter, Jillian Murray, Michael Nouri, Katherine LaNasa, and Jason Dohring, are some of the folks that appear in this film.

The first third of the film seems to have a slightly overbearing religious tone to it. 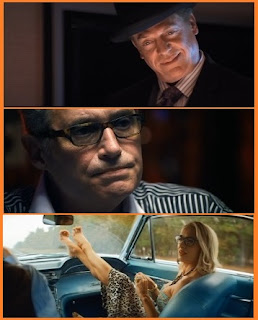 So, I was a little worried this flick was going to be one of those films made by right-wing religious fanatics.

If you've ever been fooled into watching what seemed like a run-of-the-mill low budget horror flick, only to be shocked by all the right-wing religious rhetoric being spat-out by the characters, then you know what I'm talking about. Always read the back of the DVD case. But, even then, you might get fooled. 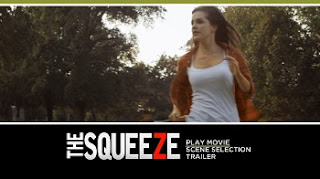 Anyway, Jillian Murray's character - Natalie - is a sarcastic and sanctimonious bitch, and a bit of a hypocrite. She's only virtuous when it suits her needs. Fortunately, Jillian Murray is adorable and has two of the most beautiful legs I've seen in years. I truly hope she's nothing like Natalie. You might recognize Jason Dohring from the tv show called VERONICA MARS. As for Christopher McDonald, he's appeared in countless flicks. One of those movies was REQUIEM FOR A DREAM ( one of my favorites ).

The disc extras are..... Just some trailers for, LOUDER THAN WORDS, HORSE CAMP ( which looks and sounds like it might be horse CRAP... ha-ha ), A LITTLE GAME, and THE SQUEEZE. 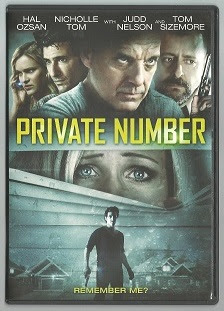 This is a murder mystery mixed with supernatural elements.

PRIVATE NUMBER is almost as exciting as a week old cup of rewarmed hot Chocolate.

I found myself yawning, and fast forwarding, A LOT!

I found the first half to be really slooooooow. The rest of the movie picks up steam, and is much more interesting.

Almost forgot to mention, Judd Nelson and Tom Sizemore appear in this movie... Hope they got paid well.

I did NOT hate this movie, but I didn't like it either. 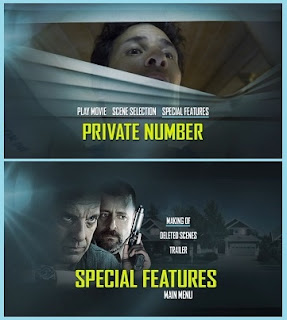 Extras on the disc are, MAKING OF, and DELETED SCENES.

Contains trailers for, SOMETHING WICKED, THE BARBER, WALKING DECEASED, and PRIVATE NUMBER.
Posted by CVB at 11:51 AM 2 comments:

We interrupt our regularly scheduled programing for some RANTS ( JUNE 2016 )

The publications above aren't good enough to be used as toilet paper.

I've reached a point in my life, where I am truly sick of 'taking-the-high-road'.

This news is for those of you that know what FANGORIA magazine is ( and it's website ).

I've been told that SHAM-goria, an ODE-TO-NEPOTISM, ASS-KISSING, and SELF-AGGRANDIZING, usually known as FANGORIA has another new editor. I've also been informed that many writers have also been eliminated.

Assuming that's all true, does it shock anyone?

That publication has NO integrity. For far too long, they published advertising disguised as articles. Those 'articles' would plug whatever the writer, or 'friends-of-fangoria' were working on. One of the former editors even plugged a 'CON' he created. If I remember correctly, it was being promoted on the FANGORIA website. After being told about that, I had to see it for myself, and it was true. That's how shameless they are.

In the past, another prominent employee defended a couple of infamous child-raping filmmakers... Any person that would do that is just as much a degenerate as the ABOMINATIONS they're defending!

SHAM-goria, has been dead to me since the original editor left. However, for a brief period of time - 2005 to 2008 - I supported that publication because of my feelings for someone that was associated with that rag. I sincerely regret doing that. If I could go back in time and do things differently, I would.

I've already written about how much I hate almost all current HORROR magazines and websites. But, I felt a need to express my feelings again.

It's time for that shameless-piece-of-shit, and it's counterparts, to finally cease publication.

SHOUT FACTORY CAN BURN IN HELL.....

I used to like SHOUT FACTORY. I stopped purchasing their titles around the same time I stopped spending more than five dollars for single movie DVDs.

I recently found out, they released two of the JEEPERS CREEPERS films - directed by one of the most NOTORIOUS CHILD RAPING FILMMAKERS in history.

Apparently, SHOUT FACTORY does NOT have a problem putting money in the pocket of one of the most infamous CONVICTED CHILD RAPISTs in the United States. As for the folks at MGM, every person responsible for allowing these movies to be on the market, should be beaten within an inch of their lives, and then, put in the same room with the victim's family.

SHOUT FACTORY, you have truly hit rock-bottom, and I truly hope it all comes back to you a hundredfold.

Francis Ford Coppola needs the shit kicked out of him for proudly working with and supporting this SHAMELESS ABOMINATION.

As I've said before, no SANE person can justify defending such a DISGUSTING STAIN UPON HUMANITY.

If that ABOMINATION had RAPED YOUR CHILD, would you be KICKing his ass, or KISSing his ass?... Do his defenders treat the CHILD RAPISTs in their community with the same respect?

If that had been my child, I would have beaten that FUCKING PIECE OF SHIT to death the very same day.

There are far too many MENTALLY-ILL-YOUTUBE-TROLLS that defend this VILE-PIECE-OF-FILTH!... I hope it all comes back to haunt them.

I truly hope all of salva's supporters get what's coming to them, sooner rather than later. 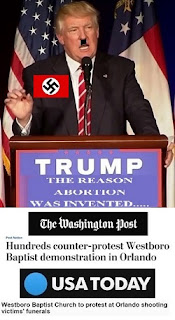 Enough!... I'm fed-up with the never ending hatemongering, stupidity, and cowardice, of far too many people in our country. TRUMP, the WESTBORO BAPTISTS, and their supporters can drop dead... The sooner, the better.....

AMERICAN PIE: THE BOOK OF LOVE 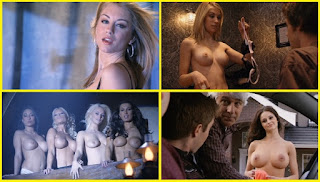 I'll start by saying, I've never seen any of the previous AMERICAN PIE flicks and I have no desire to do so. However, when I found a copy of this movie at one of my local DOLLAR TREE stores, I thought, "what the fuck, it's only a buck"

The story involves three friends that find a homemade book filled with tips on how to get laid. Unfortunately, the book is damaged, so it's up to them to restore it. 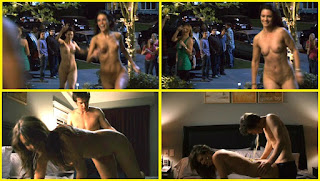 You'll see many familiar faces, and a lot of cute ladies.

If you're obsessed with breasts, then you'll love this film. Why?... because there's a ton of boobs on display. BUTT, that's not all, you also get plenty of ASSES, and even a few BEAVERS... Plus, an amorous MOOSE and a disgusted RACCOON.

Almost forgot to mention all the gross humor. 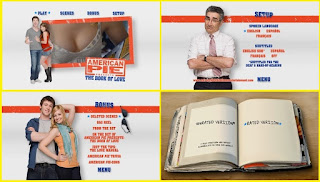 The region one DVD, lets you choose between the UNrated and R-rated versions of the film.

ON THE SET OF AMERICAN PIE PRESENTS: THE BOOK OF LOVE

JUST THE TIPS: THE LOVE MANUAL

AMERICAN PIE: THE BOOK OF LOVE is ONE DOLLAR WELL SPENT!
Posted by CVB at 11:45 AM 3 comments:

In my opinion, FRANKENSTEIN MEETS THE SPACEMONSTER is a ridiculous masterpiece, and one of the tastiest pieces of cinematic-cheese ever filmed! I also feel that way about a few other flicks. 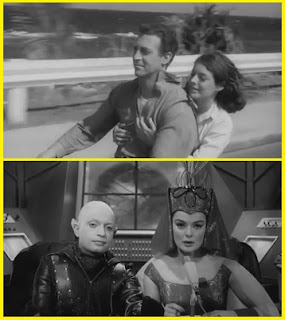 It's one of my many youthful favorites, and I will NOT apologize for having those feelings to anyone... ha-ha.

As a kid, I had a ton-o-fun watching this goofy and smile inducing flick numerous times - usually as part of a double or triple feature in a theater, and also on television. 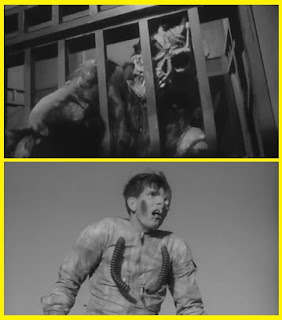 FRANKENSTEIN MEETS THE SPACEMONSTER was written by George Garrett and directed by Robert Gaffney.

It stars, James Karen, Nancy Marshall, Marilyn Hanold, Lou Cutell, and Robert Reilly. Some of these folks have had very LONG careers in showbiz, and you've seen others in popular movies and shows. 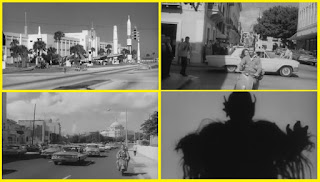 I thought both of the lead actresses were very attractive.

I love looking at all the cars from the sixties and the VESPA the main characters ride on.

I also think the music fits the mood of the movie. 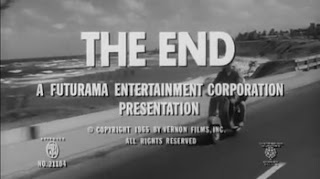 I don't know if this movie was ever released on legit VHS.

As for region one DVD, I think a company called DARK SKY may have released it.

You can also watch it for free online.
Posted by CVB at 1:34 PM 4 comments: