MADE FOR TELEVISION MOVIES PART 3 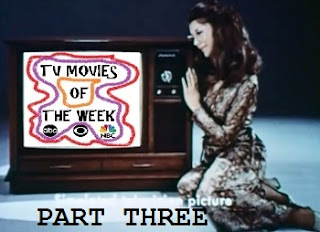 MOVIES MADE FOR CABLE CHANNELS.....
Cable channels didn't have to worry about censorship, so that gave them an edge when it came to nudity and violence. There are plenty of good made-for-CABLE-tv-flicks. Below are two of my favorites. 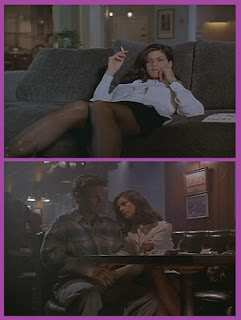 In my opinion, Bridget Gregory is one of the most memorable femme fatales to ever appear in a movie. It was released on region one DVD by ARTISAN ( OUT OF PRINT ). FYI: They made a sequel. 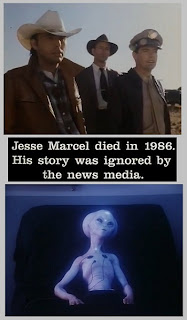 ROSWELL - If I remember correctly, this movie aired on SHOWTIME. Tons of familiar faces appear in this flick. Such as, Kyle MacLachlan, Xander Berkeley, Dwight Yoakam, Charles Martin Smith, Philip Baker Hall, Martin Sheen, and many others. It also has some very cool special effects.

ROSWELL was released on region one DVD by ARTISAN ( OUT OF PRINT ).


GOOD ENOUGH FOR THE BIG SCREEN?.....
Some of the made-for-tv-movies, that aired on the FREE channels, were actually shown theatrically in other countries. DUEL is a great example.

I don't know if TRILOGY OF TERROR was ever shown theatrically, but in my opinion it was good enough.


AVAILABILITY ON HOME VIDEO.....
I don't know how many of these movies were released on VHS. However, there must be at least a hundred made-for-tv-movies available on DVD ( legit "pressed" discs, and grey-market DVD-Rs ).

I recommend you buy them on the cheap, in multi-movie packs, from companies like ECHO BRIDGE, MILL CREEK ENTERTAINMENT, and TGG DIRECT. 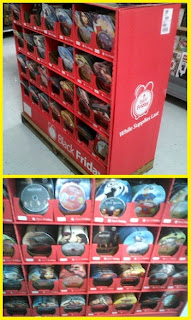 Display of TGG DIRECT single movies that were priced at ninety-six cents each ( at WALMART ). NOTE: These flicks are packaged in BLISTER PACKS... Just like HOT WHEELS! 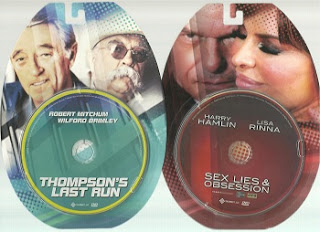 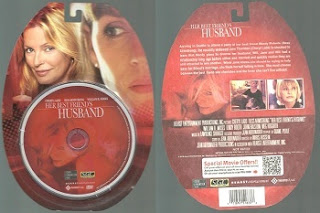 IS ANYONE PRESERVING THESE FILMS?.....
Far too many made-for-tv-movies seem to have vanished off the face of the earth.

If it wasn't for companies like MILL CREEK, ECHO BRIDGE, TGG DIRECT, and the GREY-MARKET, most of these movies would be lost forever.

I've only scratched the surface with this list. There are TONS of other movies I have not mentioned.

I just wanted to remind folks of how underrated and neglected most of these films are.

I really miss made-for-tv-movies. New ones seem to be few and far between, and that's a shame.....
Posted by CVB at 9:36 AM No comments:

MADE FOR TELEVISION MOVIES PART 2 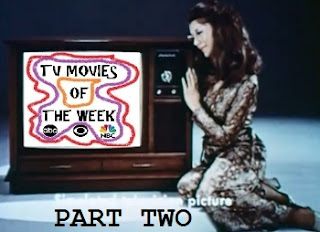 She definitely had the right attitude, beauty, and talent for the job. She would have kicked ass and looked good doing it, had she chosen to take that path! 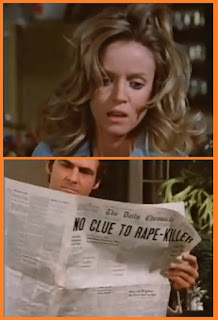 THE BAIT - Ms. Mills plays an undercover cop that's trying to capture a serial killer. I love this flick. William Devane and June Lockhart also appear in this movie. THE BAIT only seems to be available on grey market DVD, via a company called MODCINEMA. 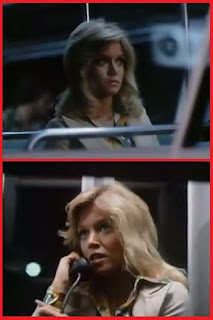 You can also watch both of these flicks online.


PAMELA SUE MARTIN.....
In my opinion, Ms. Martin is really underrated as an actress. 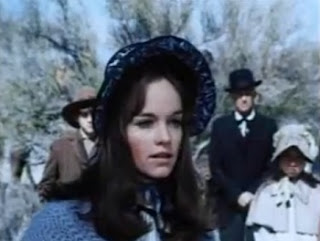 THE GUN AND THE PULPIT - Pamela Sue Martin is one of the stars of this somewhat off-beat western. I liked this movie a lot. It's available on region one DVD via MILL CREEK ENTERTAINMENT ( SWINGIN' SEVENTIES 50 MOVIE PACK ). A few other companies have also released it on DVD. Plus, you can watch it online. 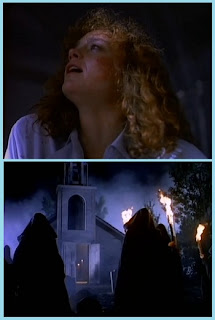 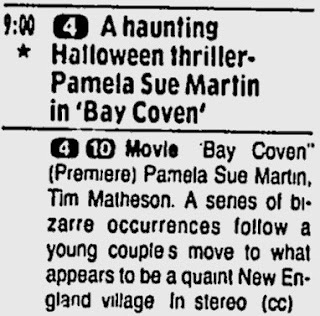 BAY COVEN ( aka BAY COVE , and aka EYE OF THE DEMON ) - Pamela Sue Martin and Tim Matheson , portray a couple of whiny yuppies that piss off a bunch of witches. I had lots of fun watching this, and I'm very happy to finally have a legit DVD of this movie in my collection.

A region one DVD was released by EVG DIGITAL ENTERTAINMENT. And as I write this, you can also view it online at HULU's webstie. 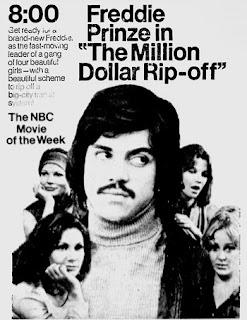 FREDDIE PRINZE ( 1954 – 1977 ).....
If Freddie Prinze had chosen to enter the GRINDHOUSE / DRIVE-IN arena, I truly believe he would have been a dominant force. He would have been perfect for roles in gritty action flicks. 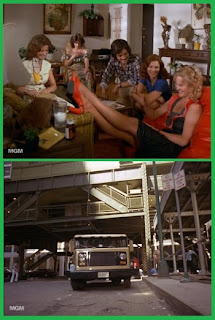 MILLION DOLLAR RIP-OFF - This is one of my favorite made-for-tv-movies. It was filmed on location in Chicago. In case you couldn't figure it out from the title, it's about a heist. It stars Freddie Prinze, Joanna Kerns, and a bunch of other familiar faces.

I really love this movie. It's short and a lot of fun. It also has some surprisingly suspenseful moments. 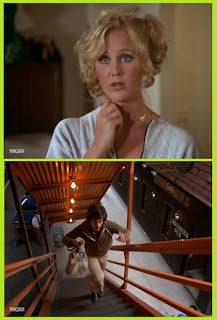 I hope TGG DIRECT, decides to pair this movie with THE TAKING OF PELHAM ONE TWO THREE ( 1974 ). I think it would make a great DVD double feature. Plus, it deserves to be released on a "PRESSED" disc. Anyway, it's finally been released on MOD-DVD by MGM. You can also watch it on HULU.
Posted by CVB at 3:12 PM No comments:

MADE FOR TELEVISION MOVIES PART 1 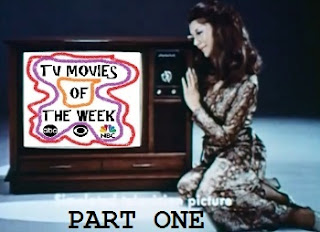 Made for tv movies where extremely popular, when I was young. I loved watching those flicks and the occasional mini-series too.

Cable channels also made tv movies, but it's not the same thing. They had much more freedom in regards to subject matter, nudity, cursing, violence, etc.
As for satellite channels, I have no idea if any of them made their own movies.

In some ways, the so-called FREE networks, were forced by censorship to be much more clever. Although, nudity and other things were allegedly filmed and added to export versions of some of their movies. 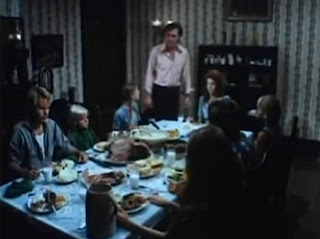 ALL THE KIND STRANGERS - Stacy Keach, Samantha Eggar, John Savage, Robby Benson, and Arlene Farber star in this movie. It's about a bunch of semi-wild kids that live in the middle of nowhere, without parents. Did I mention, they might be killers? Jerry Gross ( 1940 – 2002 ) was one of the producers.

ALL THE KIND STRANGERS is available on region one DVD from MILL CREEK ENTERTAINMEMT ( SCI-FI CLASSICS 100 MOVIE PACK and NIGHTMARE WORLDS 50 MOVIE PACK ). It has also been released by several other companies ( as solo discs, and as part of collections ). You can also watch it online. 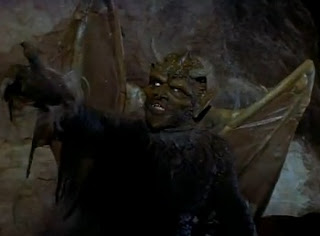 GARGOYLES - I loved this movie when I was a kid. Very cool looking creatures! The great Bernie Casey plays a gargoyle. Jennifer Salt is one of the stars. Scott Glenn also appears in this fun movie. FYI: The late great Stan Winston ( 1946 – 2008 ) worked on this film. It was released on region one DVD by HEN'S TOOTH VIDEO, and also by VCI ENTERTAINMENT. 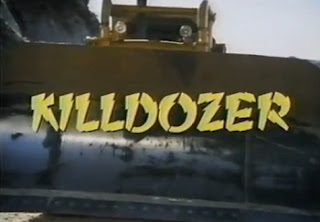 KILLDOZER - The late Robert Urich ( 1946 – 2002 ) appears in this movie. It's about a killer bulldozer, what else needs to be said? An MOD-DVD was released by UNIVERSAL. 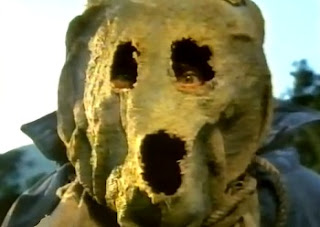 DARK NIGHT OF THE SCARECROW - This movie has a big cult following. A group of "respectable" citizens get away with murdering a youn man, or so they think. An incredible performance by Charles Durning ( 1923 – 2012 ). It was released on region one DVD and BLU-RAY by VCI ENTERTAINMENT. 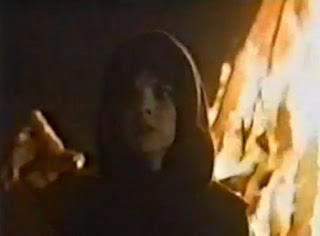 MIDNIGHT OFFERINGS - Melissa Sue Anderson plays a teenage witch / bitch. Cheesy goodness! There is NO legit region one DVD. However, grey-market discs do exist. You can also watch it online. 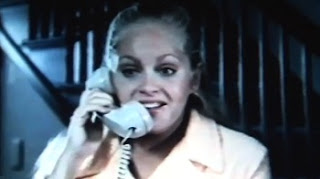 DIARY OF A TEENAGE HITCHHIKER - Some stupid girls like to hitchhike, which of course leads to trouble. Charlene Tilton plays one of the teenagers. So far, it has not been released on region one DVD, but I have seen grey-market discs for sale. You can also watch it online. 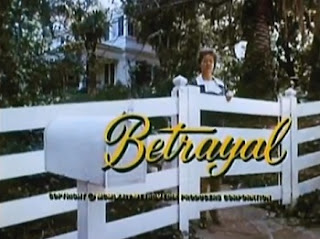 BETRAYAL - Rene Bond makes a brief appearance as a waitress. That's the only reason I watched this movie, and the only reason I'm mentioning it. This movie has been released on a few public domain sets. Such as LIFE, LOVE AND ROMANCE 12 MOVIE PACK by TGG DIRECT. You may also be able to watch it online. 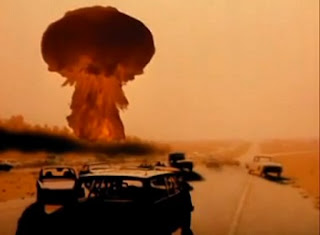 THE DAY AFTER - This movie was a true national event. It was about nuclear war, and it really made a BIG impact. People were talking about it before, and after, it aired. It was emotional, and memorable. Jason Robards ( 1922 – 2000 ), John Lithgow, JoBeth Williams, and Steve Guttenberg appear in this film. It was released on region one DVD by MGM ( out of print ).
Posted by CVB at 1:23 PM No comments: 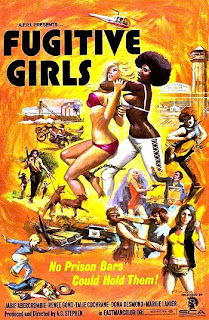 I really love the art on this poster.

Of all the movies Rene Bond appeared in, this is by far my favorite. I've seen it countless times since childhood, and I never get tired of it.

Rene Bond plays Toni. She and her cellmates, break out of prison and head for a hidden stash of cash, and a new life.

Ed Wood plays two characters in FUGITIVE GIRLS ( a caretaker of a small airfield, and a cop ).

But, that's NOT all he does. He also co-wrote FUGITIVE GIRLS.

Mr. Wood is one of my all time favorite filmmakers, and I love watching him perform in this movie. 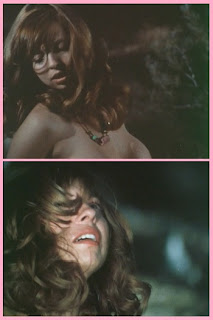 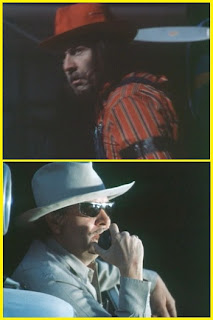 FUGITIVE GIRLS was released on VHS by several companies, but I don't know if any of those releases were legit.

It was also released on DVD / DVD-R many times, and by many companies.

SMORE has released FUGITIVE GIRLS on region one DVD at least three times!... As a solo disc, as part of a collection called THE LASCIVIOUS WORLD OF A.C. STEVENS & ED D. WOOD JR, and as part of a boxed set called BIG BOX OF WOOD.

NOTE: SMORE's release of FUGITIVE GIRLS is CUT!... My copy clocks in at 83 minutes 57 seconds.

I've been told repeatedly, that the uncut version of this movie has been sold on VHS, and DVD-R, but I can't remember the names of the companies that sold them. 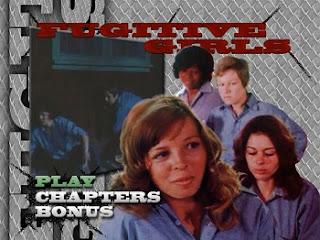 FYI: FUGITIVE WOMEN is also known as FIVE LOOSE WOMEN, and HOT ON THE TRAIL, and a bunch of other titles.
Posted by CVB at 2:13 PM No comments: