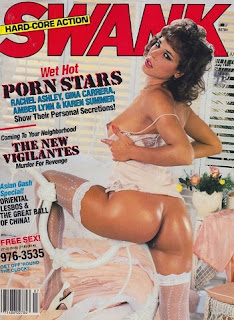 Anyway, on page 112, Mr. Rosen mentions an issue of FAO magazine. So what makes that issue of FAO so special?.... Scream-queen Michelle Bauer - aka Pia Snow - is on the cover.

Just for the record, I don't know how many aliases she's used.

That part of the book brought back memories of Ms. Bauer, or Ms. Snow, or whatever the hell you want to call her. She was popular for a short time during the VHS era. 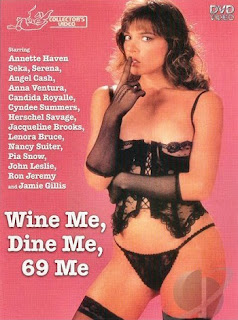 To a small group of stalkerish followers, she was, and still is, a legendary scream-queen. This, despite the fact, she's never done anything legendary on screen, and never appeared in any legendary films.

Hey fanboys, stop lying to yourselves, you never liked her for her mind, and she's NEVER been known for her acting skills.

Don't misunderstand me, because I don't dislike her. But, I've never been crazy about her either. 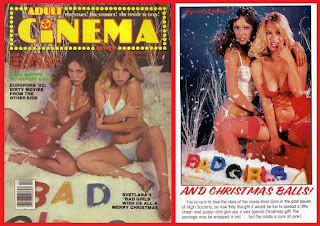 Screengrabs above are of Michelle Bauer - aka Pia Snow - in BAD GIRLS.

I don't know if Ms. Bauer has ever denied working in adult movies. One thing is for certain, she was a much better performer in her adult films than she ever was in her non-adult flicks.

BAD GIRLS was released on DVD by VCX. I do NOT own this disc, so I can't give you any details regarding video quality. 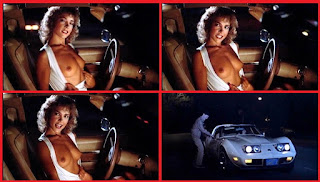 Screengrabs above are of Michelle Bauer - aka Pia Snow - in TOMBOY ( from EXCELLENT EIGHTIES fifty movie pack by MILL CREEK ENTERTAINMENT ). 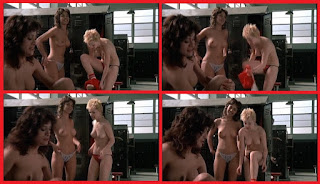 Screengrabs above of Michelle Bauer in the film CAVEGIRL ( from EXCELLENT EIGHTIES fifty movie pack by MILL CREEK ENTERTAINMENT ).

A few companies have released TOMBOY and CAVEGIRL on DVD ( both in solo form and in collections ). 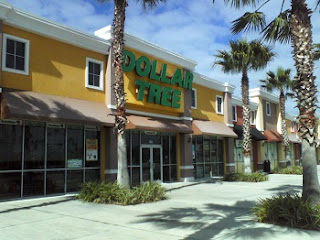 I've been bargain hunting again. Here's what I found at some of my local DOLLAR TREE stores. 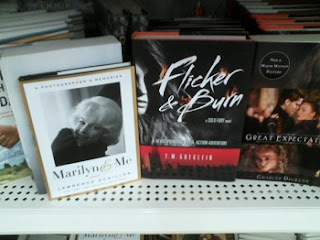 Books... It's been a while since I've found something that appealed to me on the bookshelves of my local DOLLAR TREEs. However, I did manage to find two titles.

MARILYN & ME
BOOK INFO:
ISBN ( 9780385536677 )
AUTHOR - Lawrence Schiller
COVER ART / PHOTO BY Lawrence Schiller
COMPANY - KNOPF DOUBLEDAY ( another version is by TASCHEN )
OBTAINED AT - DOLLAR TREE
PRICE - $1.00
HARDcover
SIZE - approximately 5" wide by 7" tall
PAGES - approximately 114 pages of text and a handful of small black and white photos
You can read what I think of this book by clicking HERE. 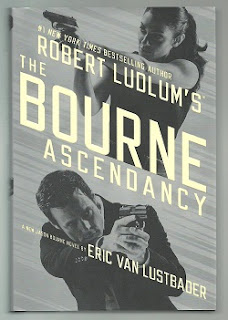 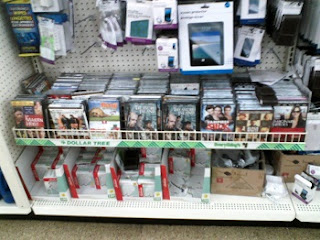 Movies... RESTITUTION stars, Mark Bierlein, Mena Suvari, and the one and only Tom Arnold. William Sadler and C. Thomas Howell also appear. Need I say more?... ha-ha. Well yes, I think I do need to say more. Let me start by saying, Mena Suvari does NOT appear naked. But, I still enjoyed this flick, especially since it was only a buck! 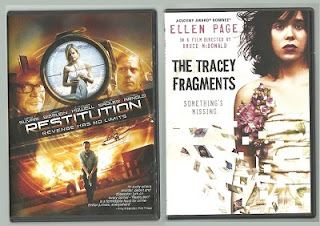 THE TRACEY FRAGMENTS was visually interesting. However, I found it difficult to care about the main character. But hey, for a buck it's great! 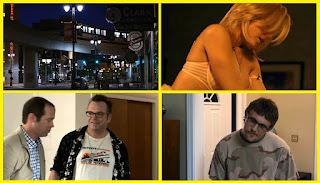 Screengrabs above are from the movie RESTITUTION.

Repeat to yourself, "what the fuck, it's only a buck!". With that attitude you'll enjoy almost any movie, tv show, or documentary you find at the DOLLAR TREE. 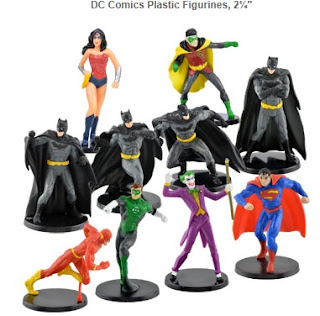 Figures... During the last couple of years, I've been finding small plastic DC and MARVEL figures at my local DOLLAR TREE stores.

SPIDERMAN is the only MARVEL character I've been able to find. I can't seem to find the HULK. I liked watching Bill Bixby in the HULK tv series. But, I really loved watching his short-lived show called THE MAGICIAN. 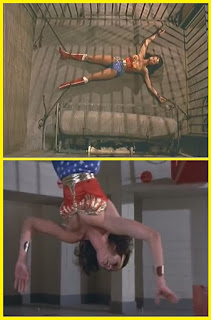 I found a WONDER WOMAN figure last week. I don't know why I purchase these things. I just can't seem to help myself.

FYI - If you live in the United States, you can watch episodes of WONDER WOMAN and the HULK on ME TV. 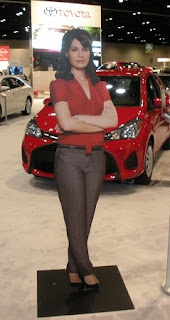 Above is a two-dimensional standee that has a million times more depth than the live action CADILLAC commercials ( FYI - yours truly took the photo at a local auto show ). 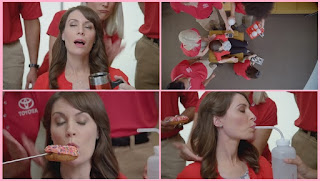 I think the brunette from the TOYOTA commercials is really cute. The ads are FAR MORE ENTERTAINING than at least half the current tv shows, and a BILLION TIMES MORE INTERESTING than all those POMPOUS CADILLAC commercials. 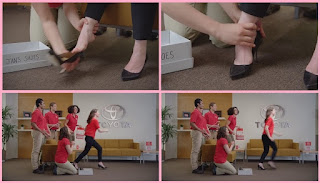 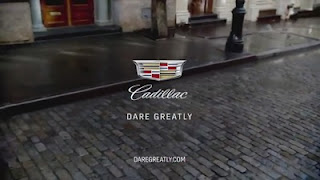 Screengrab above is from one of CADILLAC's new tv commercials... "DARE GREATLY" has to be one of the lamest taglines ever!

Have you seen those FUCKING HORRIBLE CADILLAC commercials?... They're some of the WORST tv ads I've seen in years! What the hell are they selling?!... It sure as hell AIN'T cars!

Those ads are a video love letter to HIPSTER-DOOFUS-DOUCHEBAGS, who think roughing it is going an entire day without being able to log into FECES-book, sorry, I meant FACEBOOK.

Heaven forbid, you should have the audacity to ask CADILLAC for a physical brochure. The answer will be NO, they'd rather throw away millions on BULLSHIT tv commercials, free swag, and free food, for so-called automotive journalists, and a zillion other ridiculous things. But you, the person that works for a living and make it possible for them to continue to exist, get nothing!

The folks at GM's CADILLAC division have turned into some of the biggest ELITIST-PIGS in the country! They're even trying to distance themselves from the rest of GM. 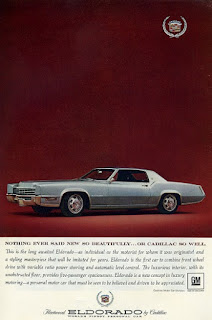 Above is a print ad for the 1967 CADILLAC ELDORADO.

I still remember being mesmerized by the 1967 ELDORADO when I was young ( FYI - el dorado should be TWO words NOT one ). Yes, I know it was done for copyright reasons, but it's still not correct.

Earth calling CADILLAC!... You're NOT MERCEDES, or ROLLS-ROYCE, or BUGATTI! These days, you're NOT even in the same league as LEXUS, got that?! 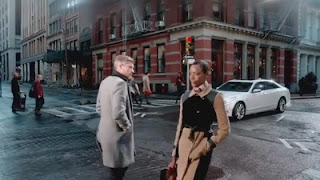 Screengrab above is from one of CADILLAC's new tv commercials... Look at the way that androgynous looking female is dressed ( I'm assuming it's a woman, ha-ha )... They're all a bunch of REAL LIFE ZOOLANDERS!

Dear CADILLAC you're a bunch of UNGRATEFUL-ARROGANT-PRICKS-N-CRACKS!

Just for the record, I think CT6 sounds like the name of a birth-control pill, not a car!

Dear GM - and especially the CADILLAC division - before the BAIL-OUT, you would NOT exist without your customers, former customers, people that purchased your parts, and paid to have their vehicles serviced at your dealerships! AFTER the BAIL-OUT occurred, you owed a HUGE DEBT to EVERYONE in this nation!... GM, you would NOT exist without us, and you damn well better remember that!

I almost forgot to mention... Apparently, if you're over thirty years of age, then you don't exist for CADILLAC.

The next time GM gets into trouble, they can EAT SHIT AND DIE! 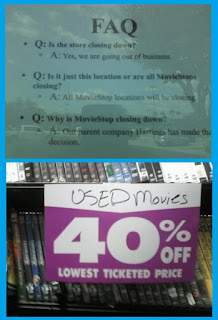 Cell phone photos above, were taken at one of my local MOVIESTOP stores.

A while ago, I wrote about MOVIESTOP, after it was taken over by HASTINGS. Well, I was correct in assuming the worse. All MOVIESTOP locations are CLOSING!

The following FAQ was posted on several windows of my nearest MOVIESTOP location....

"Q: Is the store closing down?"
"A: Yes, we are going out of business"

"Q: Is it just this location or are all moviestops closing?"
"A: All moviestop locations will be closing"

"Q: Why is moviestop closing down?"
"A: Our parent company HASTINGS has made this decision"
Posted by CVB at 12:50 PM 4 comments: