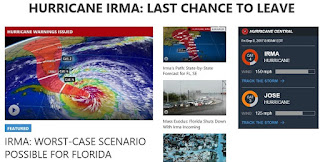 Dealing with ugly personal crap isn't bad enough, then add all the unnecessary bullshit we get from the NAZI-LUNATICS and cowards in Washington DC, and your head will feel like it's going to explode.

And yet, most of us find a way to deal with it.

We are directly in IRMA's path.

I'm also fucking tired of all the BAD PEOPLE of this world getting away with things, and hardly ever getting the punishment they deserve.

If only I could put Kim Jong-un, Nazi-Trump and his buddies, Vladimir Putin, Bashar al-Assad, Rodrigo Duterte, Nicolás Maduro, and several others in the same room and let IRMA have her way with them... That would be good.

Instead, it's the rest of us that keep getting FUCKED!

I still remember my first natural disaster. I was with my family in a basement, as we hid from a tornado.

My worst memory was of my first earthquake ( San Fernando 1971 ). You can NOT hide from an earthquake, and in my young mind, I truly thought the world was coming to an end.

The last big hurricane I experienced, was nowhere near as bad as IRMA promises to be.

During the past week, I've seen a lot of verbal - and a few physical - fights at local businesses. The vast majority of people have behaved decently.

Gas and food keep selling out.

I don't know what's going to happen, and maybe it's better that way.
Posted by CVB at 9:58 AM 4 comments: