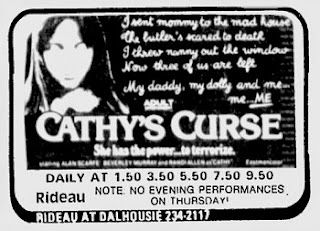 Newspaper ad from THE CITIZEN ( from Ottawa Canada )

CATHY'S CURSE is from Canada. I watched it on television quite often when I was younger.

This movie was written by Myra Clement, Eddy Matalon, and Alain Sens-Cazenave.

It was directed by Eddy Matalon. 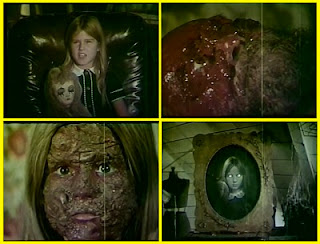 There seems to be a lot of hate for this flick, but that just makes me like it even more.

I've been told repeatedly by some Canadian folks, that a longer version of CATHY'S CURSE exists. However, none of them have ever given me any specific details. 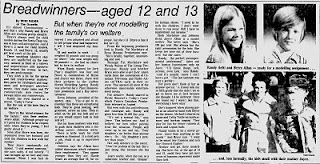 Newspaper article from THE GAZETTE ( from Montreal Canada )

Do any of my Canadian readers remember seeing this newspaper report when it was new?... Should the article about Randi Allen's family be considered "tabloid journalism", or was it a legit news story?

I don't know if CATHY'S CURSE ever had a legit VHS release in the United States. 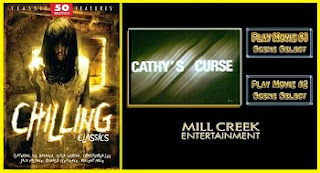 This movie is easy to find on region one DVD. I recommend you get it as cheaply as possible.

A lot of companies have released it. Such as, SYNERGY, ALPHA, BCI, and others.

I found my copy in a fifty movie collection called CHILLING CLASSICS by MILL CREEK. It only cost me ten dollars. It's in FULLscreen.
Posted by CVB at 2:20 PM