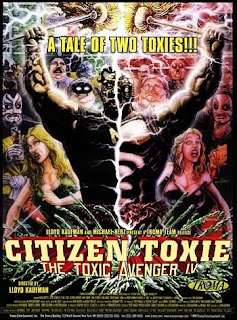 This is the fourth movie in the TOXIC AVENGER franchise.

Toxie manages to get transported to a parallel universe. It appears to be the same TROMAVILLE he knows and loves, but it's not. His goodness is considered evil in this version of TROMAVILLE.

Meanwhile, Noxie - his evil doppelganger twin - has been transported to his beloved TROMAVILLE. Noxie proceeds to cause death and destruction every chance he gets. People think Noxie is Toxie.

Will Toxie find his way back?

Will he be able to stop his evil twin?

Will Noxie take advantage of the situation by having sex with Toxie's wife?....

This movie was released on VHS by TROMA.

It's also available on region free DVD by TROMA.

This is PART 3 OF 22 in my series of short posts about evil twins... NOTE: not all the twins are evil and some of them are NOT technically twins...
Posted by CVB at 5:58 PM