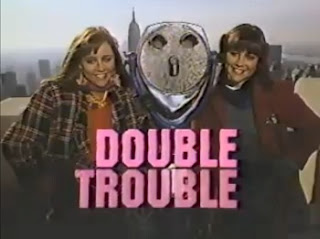 DOUBLE TROUBLE was a tv show that aired on NBC in the early 1980s.

They were NOT evil twins.

Kate and Allison Foster were portrayed by real life twins Jean and Liz Sagal. They also happen to be Katey Sagal's sisters.

Oh boy, I remember all the dirty thoughts I had about these two... BUTT seriously folks, I thought DOUBLE TROUBLE was harmless escapism.

Yes, it was one of those lame-ass sitcoms. The sisters would get into sitcky situations and wackiness would ensue.

DOUBLE TROUBLE was a "guilty pleasure", except I felt NO guilt about liking this show.

As far as I know, the show was never officially released on region one DVD. In fact, I don't remember it being on VHS either.

I've seen bootleg collections - of the entire series - at conventions. But purchasing sets like that, is a huge waste of money. Why? Because you're just buying CRAP!... The bootleg DVD versions are usually transferred from homemade VHS recordings!

This is PART 8 OF 22 in my series of short posts about evil twins... NOTE: not all the twins are evil and some of them are not technically twins...
Posted by CVB at 6:44 PM