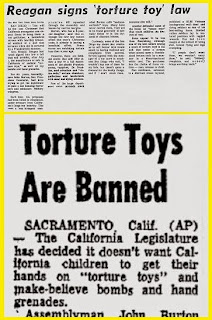 As you may know, in 2014 those HYPOCRITE-AFTERBIRTHS aka TOYS-R-US, banned the sale of all BREAKING BAD items. Well, that bullshit brought back a flood of youthful memories.

During the late sixties and early seventies A LOT OF THINGS were causing a stir. One of those controversies revolved around a series of plastic model kits made by AURORA. That series was called MONSTER SCENES. 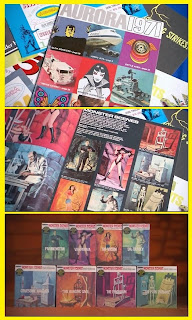 The powers-that-be in California even passed a law banning the sale of violent themed toys - Did anyone challenge the legality of it?

I don't remember them banning "cap guns" or any other type of toy gun ( I had TONS of them ). I don't think they banned the use of REAL shotguns / rifles by minors either.

Blaming inanimate objects for people's BAD BEHAVIOR has always been an acceptable excuse in our country, and I don't see that changing anytime soon. 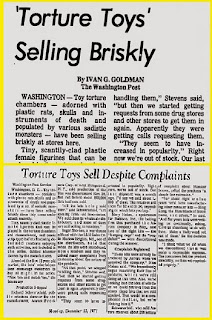 During the sixties and seventies, attitudes were truly different. Most people actually spoke-out and took action when they thought something was unjust.

Now-a-days, city, county, state, and federal governments can do almost anything they want, and most of the population won't say a word.... If you're willing to GIVE UP YOUR RIGHTS, then you DESERVE TO LOSE THEM! 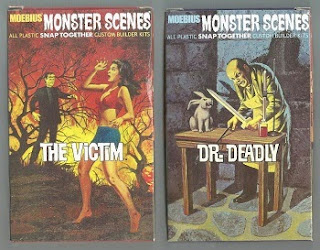 Box covers of the DR. DEADLY and VICTIM reissued kits by MOEBIUS / DENCOMM ( these two kits are from my collection ).

HISTORY REPEATS ITSELF, AGAIN, AND AGIN, AND AGAIN.....

In regards to the BREAKING BAD fiasco... It's the MORAL MAJORITY all over again.

Banning plastic figures, because they do not represent someone else's twisted idea of FAMILY VALUES is obviously ABSURD. How many of those RETARDED-HYPOCRITE-RELIGIOUS-FANATICS have ever complained about children having easy access to guns?!

So, an innocuous hunk of plastic aimed at adult collectors is bad for society? But, it's PERFECTLY ACCEPTABLE to let a mentally disturbed young man have access to all sorts of guns and ammo?!

Or how abut GIVING AN UZI TO A CHILD. How the fuck is that GOOD FOR society?!... How the hell does that constitute FAMILY VALUES?!... AND why is that legal?!

Or how about putting a loaded gun in your purse, going to the store and leaving it within reach of your child?!

This type of INSANE MENTALITY is inexcusable. 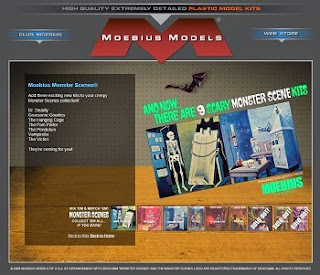 So, I purchased DR DEADLY and THE VICTIM from a place called MODEL EMPIRE ( modelempireusa.com ).

I've wanted these kits since the early seventies, and now I have them.

Just for the record, people pay ABSURD amounts of money to third-party sellers for the original kits. 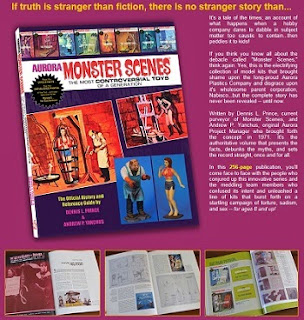 There is a book that deals with the history of these kits. See details below...

NOTE: Most of the book information was taken from AMAZON. So, I can NOT verify it as accurate.

Also, I do NOT own this book, so I can't tell you if it's worth purchasing. In fact, I have NOT been able to find it at any of my local BARNES & NOBLE stores, or my favorite online store HAMILTONBOOK.COM.

You can get it directly from DENCOMM. However, I don't think they take money orders or checks ( they do NOT list them as payment options on their website ). 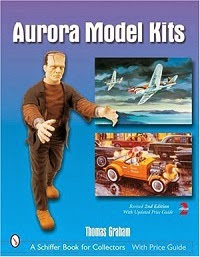 There is also a reference book about AURORA model kits. See details below...

I also do NOT own this book. So, I can NOT verify any of the information to be accurate. I also can NOT tell you if the book is worth owning.
Posted by CVB at 11:14 AM